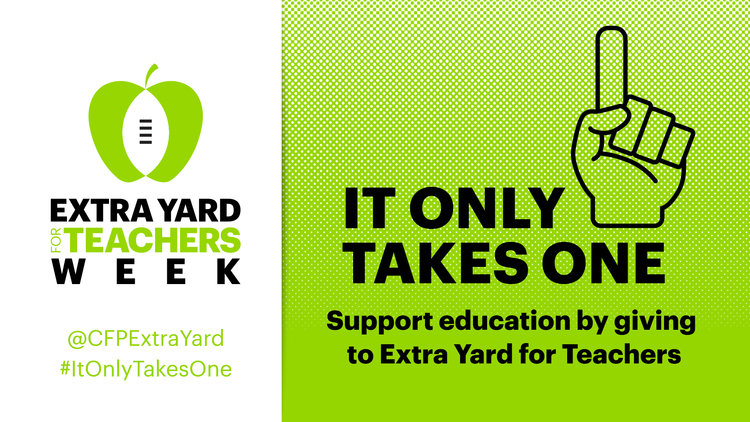 “It Only Takes One” Video Features Released as Part of Extra Yard for Teachers Week, a National Celebration of Teachers

Fans are encouraged to participate in Extra Yard for Teachers Week by honoring teachers who positively impacted their lives by creating their own tribute videos on social media using the hashtags #ItOnlyTakesOne and #ExtraYardWeek. Fans can further support education by adding a donation sticker to their Instagram stories for the CFP Foundation or by donating directly through the CFP Foundation’s Facebook page.

The CFP Foundation’s “It Only Takes One” series enters its third year after garnering millions of views on social media since its 2017 debut. The Foundation will re-release its previous episodes this week alongside the 2019 vignettes as part of its overall effort to honor and celebrate teachers. Additional videos include Troy Aikman (UCLA), Tim Brown (Notre Dame), Tony Dorsett (Pitt), “Mean” Joe Greene (North Texas), Daryl Johnston (Syracuse), Russell Maryland (Miami), Herschel Walker (Georgia) and Darren Woodson (Arizona State). All told, the campaign features gridiron greats who have won four Heisman Trophies, seven national championships and 21 Super Bowl titles. The vignettes are scheduled to be shown in stadiums during select home games at each player’s respective alma maters, as well as on social channels of the institutions’ respective conferences.

“We’re grateful these former student-athletes are willing to share stories about the one teacher who inspired them,” said CFP Foundation Executive Director Britton Banowsky. “All of us can point to a teacher who made a significant, lasting impact on our lives. By sharing these stories on a national platform, these football legends and broadcasters will help the CFP Foundation celebrate, recognize and elevate teachers, a critical part of our mission.”

Supported by the CFP Foundation and its college football partners, EYFT Week was created in 2015 as a national celebration of teachers. The CFP Foundation works in close partnership with the institutions, conferences, bowls, ESPN, and education supporters across the country to recognize and elevate the meaningful work of teachers.

For more information about the CFP Foundation, visit cfp-foundation.org.

About the College Football Playoff Foundation and Extra Yard for Teachers

The CFP Foundation is the community investment arm of the College Football Playoff, supporting education across the country. The CFP Foundation’s primary cause platform, Extra Yard for Teachers, is dedicated to elevating the teaching profession by inspiring and empowering teachers in four focus areas: resources, recognition, recruitment and professional development. The CFP Foundation utilizes multiple partnerships to execute its initiatives and support positive educational outcomes. To learn more, visit cfp-foundation.org and follow Extra Yard for Teachers (@CFPExtraYard) on social media.