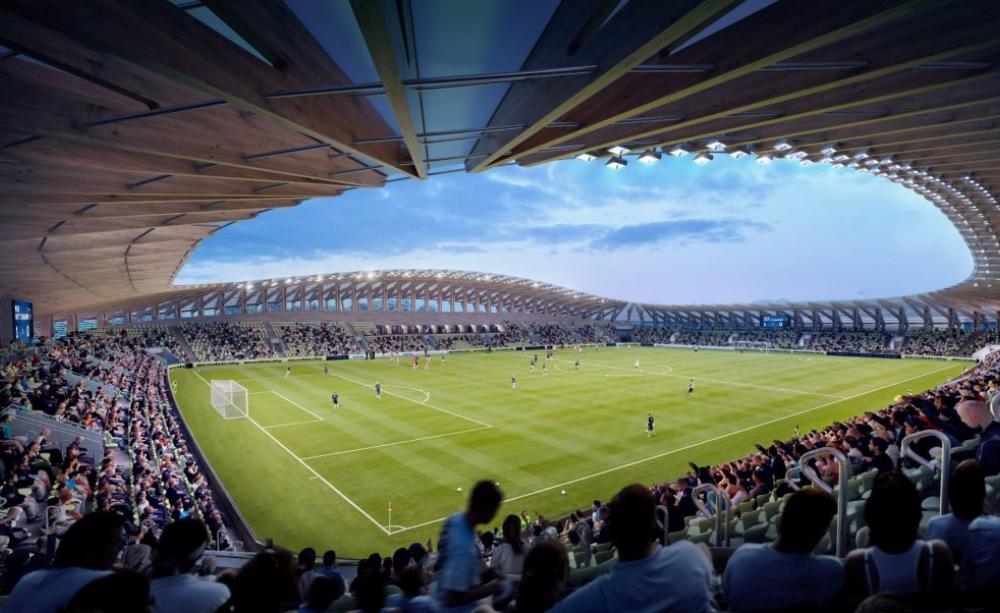 Local football clubs are increasingly threatened by extreme weather and flooding. What are they doing to reduce their carbon footprint and tackle climate change?

A number of non-league football clubs in England are facing an uncertain future due to the impact of flooding on their stadiums.

Increased rainfall and more extreme temperatures are having a detrimental impact on our planet. You don’t have to look too far back or too far away to see the effect severe weather is having on football clubs in our part of the world.

Climate change is having a huge impact on established football clubs, while teams lower down the football pyramid are even more vulnerable to these increasingly extreme weather patterns.

League Two side Carlisle United were forced out of their stadium for over a month in 2015 after flooding ravaged their Brunton Park home for the second time in ten years.

Sixth tier Gloucester City are still yet to have a permanent stadium after floods destroyed their former home Meadow Park. Many more clubs have encountered the same problem.

North Yorkshire-based side Tadcaster Albion have also felt the full force of flooding. Founded in 1892, ‘The Brewers’ ply their trade in the Evo-Stik East Division but their 127-year history was almost eradicated due to flooding not once, but twice.

In 2015, water submerged the club’s stadium – Ings Lane – entirely and even more recently, in March 2019, the club endured the same alarming  flooding.

The club have, in time, recovered from thousands of pounds worth of damage but Membership Secretary and Press Officer Jay Taylor emphasised that the club faces an uncertain future if it happens again.

Taylor warned: “The floods that affected the club in 2015 cost us £250,000, which was incredibly difficult to come back from.

“Fortunately, this year’s flooding was nowhere near as bad and left much less damage to repair.

“The water didn’t get into the clubhouse this year. If it had, it would have been disastrous for the club as we’ve only just managed to recover from the floods of four years ago.

“If the weather is that extreme and that relentless again the club could well be at risk. Being situated next to the river we are obviously always going to be at risk but fingers crossed it doesn’t happen to the level of 2015 again as that would be tough to come back from.”

Another club who have had to fight back from flooding is Greater Manchester-based side Ramsbottom United.

Ramsbottom have had to recover from flooding twice. In 2012 and 2015 their home was completely submerged. Ramsbottom’s club secretary Tony Cunningham said: “In 2015, water was almost up to the crossbar on the goal.

“The dressing rooms, the teabar and even the elevated Sponsors Lounge were submerged and the car park outside the ground resembled a lake. It took us well over £40,000 to get the club back up and running.

“The bank balance was seriously threatened but thanks to the careful budgeting of our chairman we were able to cover the costs. As a result our future was not in jeopardy, although we know this has been an issue at other clubs.

“We eventually managed to recoup two thirds of the costs from the FA Football Foundation, but this took almost twelve months, and could quite easily have caused financial problems. The FA need to look at speeding up any system for compensation but at our level we are generally overlooked by the FA in regard to much of what goes on.”

Tony Cunningham and Ramsbottom aren’t alone. Jay Taylor of Tadcaster Albion also spoke of how Football’s governing body needs to do more to help clubs battle back from disaster.

Taylor said: “I would say that the FA could potentially do more to help out non-league clubs who suffer with adversity.

“It’s common knowledge that there is an enormous amount of money pumped into the higher leagues and it would be nice to see the lower leagues helped out where necessary. How that would work I’m not sure though.”

Without the riches that other clubs at higher levels boast and with changes to the climate expected to intensify the impact of flooding in the years ahead, non-league clubs face an uncertain future.

Could a more sustainable model be the key to reversing the impact of global warming? It is now down to football clubs and governing bodies to start making a change.

Some already have. League Two side Forest Green Rovers have set the standard for a greener way of operating becoming the first football club to win the United Nations’ “Momentum for Change” climate action award due to their self-sustaining stadium.

National League North side Dartford FC have also been highly commended for building a self-sustaining football ground. Both clubs collect and recycle rainwater and make use of solar panels, thus reducing their carbon footprint.

Jamie Peters, an environmental campaigner for Friends of The Earth, says that this is what more sports organisations need to be doing to help drive change.

Peters said: “There are lots of things that sports clubs can be doing when it comes to sustainability and tackling climate change and pollution.”

“The most important thing in terms of environmental issues is the impact that these clubs have on their followers and communities. We’re a sports crazy society and some of the strongest relationships that people have in Britain are with sports clubs. The people in charge of those clubs can send out a strong message to their followers.”

Peters continued: “If clubs can move beyond just operating on matchdays once every two weeks and spread that message beyond the field then that would be huge.

“If a club was really spreading that cleaner message, then that has an impact much greater than just on a matchday. It’s about a whole community of people that really buy into the values of these clubs, so if the clubs meet the values associated with a green transition then that could rub off on people.

“Big institutions like FIFA and UEFA are going to be pressured from the grassroots upwards. People will be expecting them to do more and some of these organisations historically have only ever acted when they’ve been forced to and I think we’re going to be seeing society demand big changes.

“Look at Forest Green, there’ll be more and more clubs looking to their model in years to come.”

Maybe it’s time the FA itself took Forest Green’s lead by investing their resources to make our football clubs self-sustainable. If the rest of the world follows, climatic disasters at clubs such as Tadcaster and Ramsbottom may, one day, become a thing of the past.