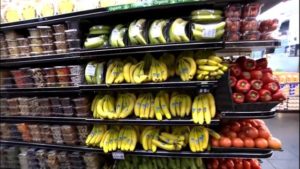 SEATTLE – Seattle restaurants and food recovery organizations are leading the charge to prevent food waste and to give that extra food to those who need it most.  About 100 food industry leaders met at CenturyLink Field Thursday to share what’s working and learn from each other.

The Environmental Protection Agency organized the event and laid out these sobering statistics: 40% of food goes uneaten, 97% of food waste ends up in a landfill, 1 in 5 households in Washington are food insufficient.

“It’s always been that area of caution because of food safety issues,” he said. “The easy part of it is we’re already preparing the food. What comes out of that is the challenge is to take care of it in a proper way with the timing, making sure it gets cold fast enough.”

Justin Zeulner, who is with the Green Sports Alliance and works with sports stadiums, shared how the efforts from sports teams impact the thousands of fans.

The Pacific Northwest has always been a leader on this issue. For example, the Green Sports Alliance started here in 2011 with six teams, including the Seahawks and Sounders. Now they have more than 600 members worldwide, including all major sports leagues.

Operation Sack Lunch, or OSL, is an organization that takes extra food from restaurants and prepares it for 15 downtown emergency shelters, food banks and other organizations.

“Each of our kitchens is sort of like the show ‘Chopped,’” Taran Graham, of OSL, told KIRO 7.  “A restaurant would contact us and say alright we just did an event and have this leftover food. So the first questions I ask are food was always at temperature control, cooled properly, heated properly, packaged and ready to go, labeled properly.”

Many participants on Thursday talked about how much technology and new apps they’ve created have helped fuel the movement.

“Really,” Zeulner said, “this is a movement that’s growing at a really rapid rate.”