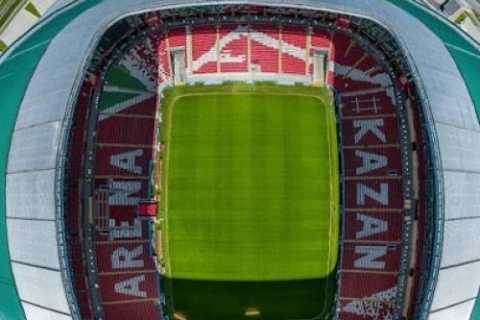 All 12 stadia being utilised for the 2018 World Cup have achieved FIFA’s new environment sustainability standards.

Russia 2018 is the first edition of the World Cup to have green building certification as a mandatory requirement for all stadia under construction or renovation.

The aim of this requirement from world football’s governing body is to ensure that the construction and renovation of stadia are carried out in a more sustainable manner, and that their design considers key environmental and social concerns that will allow for more sustainable operation in the long term.

To comply with FIFA stadium requirements and as part of the wider infrastructure project for the 2018 World Cup Russia, a new standard was drawn up in 2016 by the Russian Ministry of Natural Resources and Environment and with the support of the Russia 2018 Local Organising Committee (LOC) – RUSO.

The RUSO standard was developed solely for football stadium certification in accordance with the principle of ‘green’ construction.

FIFA said that nine of the 12 World Cup stadia were certified according to this new Russian standard, while the other three complied with the international Building Research Establishment Environmental Assessment Method (BREEAM) standard.

The three to have reached this higher standard are the Luzhniki Stadium and Spartak Stadium in Moscow and Sochi’s Fisht Stadium, which was first developed for the 2014 winter Olympic and Paralympic Games.

LOC-RUSO’s Head of Sustainability, Milana Verkhunova explained “achieving green certification for all our stadiums will have a big impact on their effective use in the long run, especially in regards to reducing expenditure on water and energy.

“This will be a game changer for sports infrastructure in Russia and a true legacy of the FIFA World Cup here.”