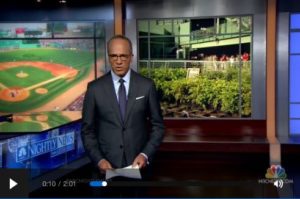 Urban gardening is all the rage and in the last few years many vacant rooftops are suddenly a bloom.

So maybe it wasn’t a surprise when one of Boston’s most fabled baseball institutions announced it to would soon join the trend.

But what has happened at Fenway Park is downright incredible.

Just above Yawkey Way is a garden that is the envy of everyone who sees it: thousands of square feet of squash, beans, tomatoes, herbs and eggplant.

Fenway Farms and has already turned out more than three thousand pounds of produce.

The fresh vegetables and herbs end up in the kitchen of the Red Sox’s high-end restaurants.

“It’s the best produce around,” he said. He whips up salads, pesto’s, vegetable side dishes and scallion pancakes with the garden’s wares.

“It was a dream come true,” Abell said. “It’s an approach that we’ve had at Fenway Park for ten years now, sourcing from local farmers… and now literally we have it 300 feet away from us.”

And while most of the produce ends up on the tables of big spenders, some of it is now available on Yawkey Way.

Not so far from the hot dogs and Italian sausages is a stand that sells wraps. Wraps bursting with kale from the roof just above. Fans told NBC News that they tasted delicious.

One fan said they were just talking about losing weight and are trying to eat something a little healthier for a change.

When fans see the garden —which is just around the corner from the Green Monster — they marvel at the size and just how good it looks.

“I love that roof garden,” fan Kelly Harrington said. “Our seats are right up there, I love it.”

Jesse Banhazl, of Green City Growers who is in charge of Fenway Farm says, “it’s just the magic of Fenway.”

“The opportunity to be farming at Fenway Park is so unique and special,” Banhazl said. “This space was previously unused, so it’s taking a previously blank area and making it productive.”