Famous for Its Green Monster, Fenway Hones Its Green Thumb

Famous for Its Green Monster, Fenway Hones Its Green Thumb

BOSTON — There’s more green at Fenway Park than the infield or the monster wall.

The Red Sox are growing vegetables and herbs in a rooftop garden. The produce is used in food and cocktails sold at the concessions, at nearby restaurants and in the team’s flagship restaurant, which prepares meals for more than 30,000 people during home games.

The 5,000-square-foot garden on the third-base side of Fenway has turned a previously unused part of the historic stadium into the largest of a handful of farms that have sprouted up in major league stadiums, said Chris Knight, manager of facilities services and planning for the Red Sox. 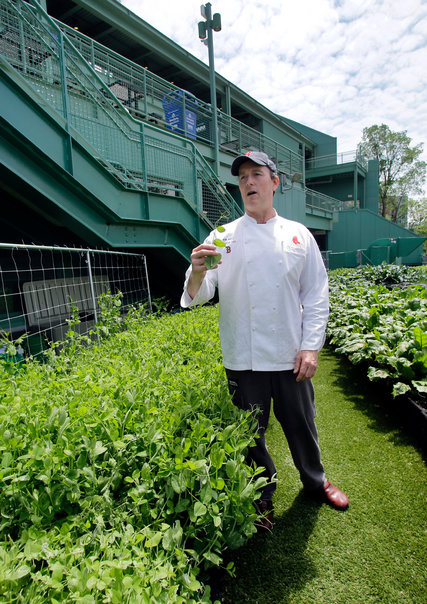 The sight of a lush, green garden on the third level of the stadium excited John Bunker, a Red Sox fan who recently traveled from his home in Palermo, Me., to see his favorite team in action and make a pilgrimage to the rooftop farm.

“This is great because although a lot of people love to come to Fenway and eat a hot dog, some people don’t want to eat a hot dog, they want to eat something else — maybe a salad or a wrap with vegetables in it,” Bunker said.
Read the full article at The New York Times.
Natalie2015-07-19T23:56:36-06:00