In 2009, Jason Brown signed a five-year, $37.5 million contract with the St. Louis Rams that made him the highest-paid center in the NFL.

Five years later, after earning more than $25 million of that contract, Brown is a farmer who is helping to feed the hungry. 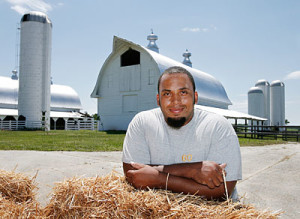 CBS News caught up with Brown in Louisburg, North Carolina, where he runs a 1,000-acre farm after learning how to grow crops on YouTube.

Brown was drafted 124th overall in 2005 and played nine seasons in the NFL before getting cut by the Rams in the spring of 2012.

At age 29, he still had plenty of NFL years ahead of him. He wasn’t playing at the level he was in 2009, but his career was far from over. He had interest from numerous teams, including an offer from the Baltimore Ravens.

But he walked away from the game. The NFL world was surprised, and ESPN ran a story with the headline, “The Curious Case Of Jason Brown.”

“My agent, he told me, ‘You’re making the biggest mistake of your life,'” Brown told CBS. “And I looked right back at him and I said, ‘No I am not.'”