‘Everybody needs to make sustainability a priority’: Nico Rosberg on his climate change challenge

‘Everybody needs to make sustainability a priority’: Nico Rosberg on his climate change challenge 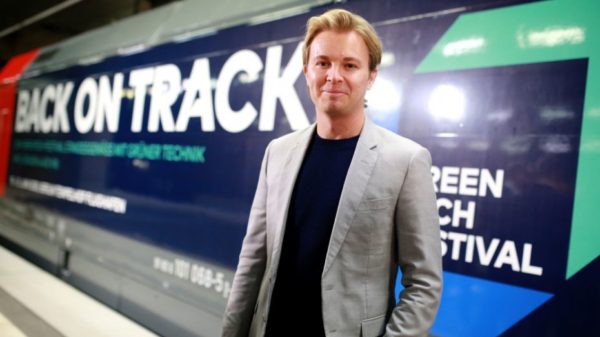 It has been three and a half years since Nico Rosberg reached his goal as a racing driver by claiming his first Formula One championship with Mercedes. Following two decades in the pit lane, it was in that single moment towards the end of 2016 that he decided his racing career was complete, and that the time had come to turn his attention to a whole new adventure.

An early investor in Formula E, the all-electric racing series which launched in 2014, the German-Finnish driver saw a natural pathway into sustainable innovation and to support the “race-to-road” transfer of technologies that motorsport can offer. Setting his sights on a new life goal, the 34-year-old last year launched the annual Greentech Festival, which is held in Berlin and works to promote green technology and cleaner forms of mobility alongside Formula E’s stopover in the German capital.

After the disruption that the Covid-19 outbreak has caused to the racing calendar, Rosberg says there are “positives to be taken from this negative period”, particularly in the ongoing battle against climate change. In response, the 2020 edition of his Greentech Festival, scheduled for 16th to 18th September, will be held both as a physical and virtual event, as the industry adapts to new travel restrictions and social-distancing measures brought on by the pandemic.

Speaking during the latest edition of the Blackbook Motorsport Direct virtual event, Rosberg shared his views on why now is a critical moment in the effort to limit the impacts of climate change and outlined the ways in which motorsport can play a pivotal role.

Rosberg on…why he invested in sustainability

I have two small kids now and studied psychology for ten years while I was in Formula One, and the key learnings I have taken is that it’s really beneficial to spend more and more time in a life of service to others.

This was a decision that I took and, in my second life now, after Formula One, even more so, I want to develop that path and, through some coincidence, that path merged with sustainability.

That is also thanks to the fact that, in e-mobility, there is such a huge opportunity now to have a positive impact. I am very proud of the projects that I have worked on so far, and I want to inspire my kids as well.

I met Sir David Attenborough not too long ago and he clearly said to me that we are now in the eleventh hour for our planet and for our civilisation. This is a huge threat and the decisive decade to achieve the Paris Agreement goals to limit climate change to 1.5°C.

We need to do this all together and especially for the next generation – that is super critical. I think that this coronavirus period will accelerate this process because it has made us aware of how vulnerable we are and it has given me the feeling that I want to do more for others and to care more.

This is what’s accelerated within me and I am sure has done the same for everybody else. There is always a positive within such a big, negative crisis.

There were many challenges. When I stopped driving in Formula One, I went into a void. I had not planned it. As a Formula One driver, I was always 100 per cent committed to simply winning that next race and to win that championship. That spanned 20 years of my life.

Suddenly, having reached my goal, it felt like the best moment to move on and presented me with a life challenge, to find a new purpose and to get engaged in something new. The best thing I did was to speak with a lot of people and found bits of inspiration that brought me down this path.

I have always been hyper focused – that was one of my strengths as a driver. Everything else didn’t exist. It’s only after Formula One that I began to open my horizons and became more aware of this huge climate threat and it has really inspired me and has become the centre of my purpose now as an entrepreneur.

The Greentech Festival is my lighthouse project. I founded it last year, it coincides with the Formula E race in Berlin, and has made me so proud. It has had such a great resonance and has been a big success, with more than 30,000 participants at the event in collaboration with Formula E.

It really is a platform for thought leaders and visionaries around green technologies to come together for a huge conference and awards ceremony, and all within a festive atmosphere. I didn’t think I would ever get back to the intensity I experienced in Formula One but here we are.

As an early investor in Formula E, I am proud to be part of its growth and success. I then went to the Consumer Electronics Show in Las Vegas and, though 50 per cent of the technology is green tech, I noticed there was no specific area for green tech. I thought that this is an opportunity to make the “green-tech platform” and why not do it with Formula E, because there is such a synergy between the two.

In terms of performance, the swing isn’t too big because it is only going to be better in some ways as we naturally progress towards electric vehicles. Of course, as a technology, it is disruptive for manufacturers. In Germany, and with Tesla leading the way, and the work that Elon Musk is doing there, the guy has singlehandedly transformed an entire industry.

I do believe that he is two or three years ahead in terms of technological development compared to the rest of the German car manufacturers, and particularly around the whole battery system and battery performance. It’s not an easy one to catch up with but I always believe in our industry, so we will eventually get there.

Rosberg on…whether Formula One and motorsport can be truly sustainable

It’s impossible because, to be truly sustainable, you would need for all of us to live in a cave. However, we can go a very long way and come very close to that, which is what Formula One has set out to do. I am the biggest fan of Formula One and always will be, and I am proud because my sport is going emissions free from 2030, with all events becoming sustainable from 2025.

What I am also proud of is that race-to-road transfer of technology that Formula One has historically contributed to. One mustn’t forget that the hybrid powertrain in the Formula One car is today a more efficient powertrain than a fully electric, which often is still charged with 60 per cent coal energy in many countries.

So, that makes the Formula One car more efficient when you look at global emissions and the overall global footprint. We’re all benefitting from that.

In terms of sustainability this is great. It is only going to reduce the number of personnel in the factories and the volume of wind-tunnel testing, so everything is going in the right direction. It’s important because everybody in the world needs to make this a priority and therefore motorsport also needs to make it a priority.

Both Formula One and Formula E are doing that, so this is fantastic news. There still remains a logistical issue, which is a huge problem. You can’t just make that go away, so Formula One will also be offseting some of that through credible compensation programs.

The next big challenge is the future of synthetic fuels and biofuels and how they can get make the whole aviation sector greener and, again, Formula One is going to play a crucial role in pushing the development of such technologies in the coming years.

I do think that sports, and in particular their large viewership and fanbase, can help to shift the consumer mindset and make people aware of the huge issue that we’re facing in climate change – to raise awareness and get everyone involved in the topic.

Within soccer, for example, all it would take is for all the players to join together on a platform and raise awareness and to kick off a huge wave of interest. Every sport has a role that it can play and that includes motorsport in its own unique way.

For me, as an influencer as well, there is the potential for me to do that. That is part of my purpose, to inspire my two young girls to take up a life of service and I hope to inspire anyone who follows me to dedicate a part of their life to doing better for others, for our society, and for our environment.