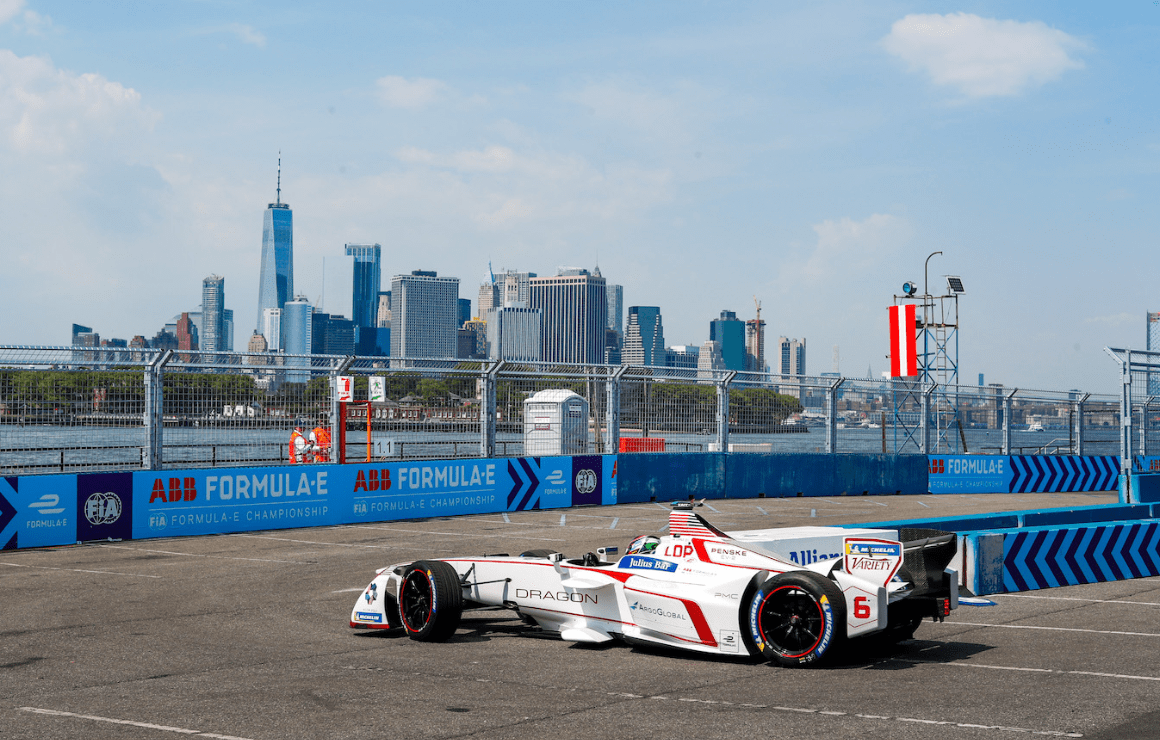 The ABB FIA Formula E Championship, the fast-growing electric vehicle (EV) racing series came to the Red Hook section of Brooklyn on July 13-14 for the season finale doubleheader of its fifth season. GreenSportsBlog took in the qualifying races and ambled through the fan zone — the Allianz E-Village — on a steamy Sunday afternoon to get a sense of motorsports’ future.

I never imagined that the future of motorsports would be so…quiet.

Ear plugs, a staple of Formula 1, NASCAR and Indy car races, were nowhere to be found as the open wheel EVs quietly hummed around the serpentine Red Hook, Brooklyn track in the shadow of the Statue of Liberty.

Sustainability, on the other hand, was in evidence virtually anywhere one turned.

After passing through the turnstiles, over 20,000 fans who attended the two days of racing entered the Allianz E-Village, an interactive showcase that featured a myriad of environmentally-themed initiatives, including:

The social side of sustainability was clearly in evidence in Red Hook as well.

“We make sure that all Formula E events benefit the neighborhoods in which we race,” shared Julia Pallé, Formula E’s senior sustainability consultant. “In the case of Brooklyn, we hired a staff of 45 for this event and most of them come from Red Hook. One of our sponsors, Modis, funded two scholarships for Red Hook students to attend university. Local restaurants like the Lobster Pound also populated our Allianz E-Village.”

While complete sustainability data for the Brooklyn event will not be available until September, Pallé is confident the results will be positive: “Before the 2018-19 season, we drafted a tour-wide plan that covered environmental, economic and social sustainability. Every host city has to at least perform to our Bronze level, with many striving for Silver and Gold. Brooklyn really stepped up on recycling and composting, thanks to Clean Vibes, their new hauler. So we think that, when the results are in in September, Brooklyn will have joined Berlin and Paris in earning Gold status.”

One would think that sustainability, especially environmental sustainability, would be firmly embedded in the DNA of an organization like Formula E. We’re talking electric cars, after all!

“Formula E had an amazing season from a sustainability point of view as our operations team jumped on board,” Pallé noted. “The turning point was a year ago, at our 2018 gala in Brooklyn. Formula E announced that we had earned ISO 20121 certification as a sustainable event. This gave the entire staff a sense of pride in our mission on and off the track. They also started to see more clearly what it meant to be part of sustainable business pioneer.”

Sustainability was far from the only successful aspect of Formula E’s season five.

“We increased our efforts to reach families and young, techno-forward people who like sports and care about the environment,” said Pallé. “In Brooklyn, the basic ticket price was only $12. Our Fan Zone is a festival type of environment, with all sorts of entertainment to go along with the racing. Many fans spend the whole day with us. This approach extends to broadcast. Our races take less than 50 minutes, perfect for the GenZ and Millennials.”

Formula E’s broadcast/cable audience is growing, thanks to 80 partners in 197 territories, including Fox Sports and BBC. According to Pat Evans, writing in the July 15 issue of Front Office Sports, “Formula E expects its final numbers to reach 400 million viewers this season…Streaming viewership in the U.S. was up 167 percent year-over-year, averaging 24.6 minutes per unique streamer.”

GSB’s Take: If Formula E comes to your city, go check it out. You will see the future of electric mobility in the present. It is fun. And it is quiet.