European ‘Green Stadium’ Certification Being Road-tested, from Vienna to Barcelona

European ‘Green Stadium’ Certification Being Road-tested, from Vienna to Barcelona

LEED and BREEAM certification have become synonymous with efforts to green sports venues. But a new standard developed in Central Europe is slowly gaining traction. 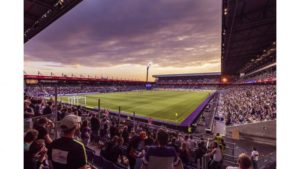 Both fans and players feel at home at the newly-built, sustainably-focused Generali Arena

THE 2017/18 SEASON WASN’T A VINTAGE ONE for FK Austria Vienna. A seventh placed-finish (out of 10 teams) and a 4-0 home drubbing at the hands of fierce city rival Rapid is not the kind of return the second most successful club in the country expects.

Red Bull Salzburg may dominate the Austrian Bundesliga – winning eight titles in the last decade – but being 40 points off the pace (and 19 behind Rapid), is unacceptable in the eyes of the fans.

It would be remiss, however, to discuss the club’s poor form without mentioning that for the past two seasons it essentially played every match away from home while its Generali Arena was being rebuilt.

Its temporary home, the 50,000-capacity national stadium named after the legendary coach Ernst Happel, was never a good fit. The biggest crowd last season was just over 15,000 spectators, meaning that it was always at least two-thirds empty. Indeed, of FK Austria Vienna’s 17 victories last season, the majority (nine) came away from home.

So three wins out of three in the newly-built Generali Arena to start the 2018/19 campaign was quite the tonic, providing renewed hope that the team can compete at the top end of the table once again. With a capacity of 13,000, and located in the familiar Viennese district of Favoriten, the new-look venue appears to have made both players and supporters feel at home again.