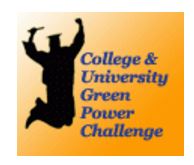 This list is current as of April 5, 2017. This is the final update to the 2016-17 College & University Green Power Challenge. Thank you and congratulations to all participating schools!