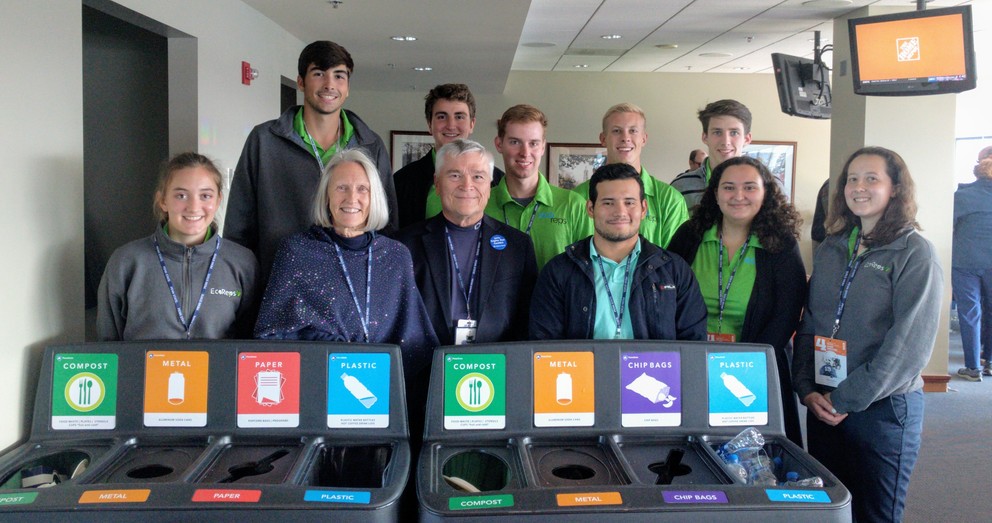 Students have stepped up and contributed to reducing, cleaning-up and diverting waste from the landfill at Penn State football games, including inside the President’s Box.

At each football game, student volunteers from the EcoReps program help guests properly dispose of their waste in an effort to reach zero-waste in the President’s Box. The main way EcoReps help achieve this goal is by standing near labeled waste bins and guiding guests use to use the correct bin as they dispose of waste such as plates, food, utensils and napkins.

Julian Groenendaal, a sophomore majoring in architectural engineering, has been with EcoReps for two years and is the director of volunteers for the zero-waste initiative. Groenendaal finds volunteers and guides them during the game to make sure waste is being disposed of properly.

“It’s been a very positive experience; it opened my eyes to the whole waste stream at Penn State,” said Groenendaal. “I’ve learned a lot about what goes into facilitating a zero-waste lifestyle and the amount of effort it takes to organize a team and working in that environment with high-profile guests each week.”

The EcoReps program is supported by Penn State Housing and the Sustainability Institute (SI). The program consists of roughly 60 EcoReps, student educators at University Park who communicate Penn State’s commitment to sustainability through events and outreach. For the past three years, EcoReps have been tasked with supervising waste disposal operations in the President’s Box.

“We are there to educate and go along with the mission of EcoReps,” said Groenendaal. “We teach people sustainable practices and show how they can live their lives more sustainably.”

In his time as director of volunteers, Groenendaal feels he has made an impact on the guests who would come and watch the game.

“The general vibe is that they [the guests] are very appreciative of us because when they come up to the waste station, they feel overwhelmed by the amount of containers,” said Groenendaal. “They are appreciative of someone assisting them and we do get a lot of questions. It’s nice to be able to explain that to them and show them how we can live sustainably. I think a lot of the guests who learn that take that with them, and try to keep that in their own life.”

The program began in 2013 when Judd Michael, professor of agricultural and biological engineering in the College of Agricultural Sciences, received a grant from the Sustainability Institute to make Penn State’s Intercollegiate Athletics more sustainable. Michael worked with the Green Sports Alliance and Intercollegiate Athletics to create this program, unofficially titled the “Athletics Zero Waste Initiative,” that allows students to educate guests and promote sustainable behavior. Since the creation of this program, the President’s Box has achieved the status of zero-waste.