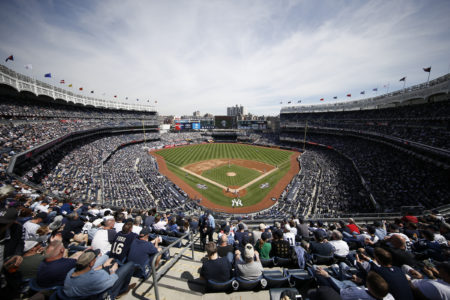 Birds-eye view of the new Yankee Stadium in the Bronx. Starting with recycled steel and concrete, and diversion of construction waste, the home of the Yankees has become one of Major League Baseball`s greenest operations. Photo courtesy The New York Yankees.

It was the hottest ticket in town and I—Yankee fan from my Bronx birth—had snagged one in the left field main deck, thanks to my old friend Wendy, who had a ticket to spare. It was May 14th, Derek Jeter night, and the Yankees honored the 42-year-old former captain and future Hall of Famer by retiring his number (2) and unveiling his Monument Park plaque. The pre-game ceremony—for which all remained standing—was filled with career-spanning clutch-play highlights, Jeter-era Yankee greats, and a Wagner opera’s worth of heroic fanfares.

When the emotional hour-long event was over, the ever-considerate Wendy took all the snack boxes, cups and food wrappers up to discard them. She returned after a long absence looking puzzled: there wasn’t a garbage can to be found anywhere. Finally, she spied a maintenance man pushing a cart, and tossed in the trash.

But that trash in her hands wasn’t trash at all. Rather, it was destined for diversion—to be recycled or composted, never to see a landfill. The new Yankee Stadium, which opened in 2009 across the street from the now-demolished 1923 House that Ruth Built, was designed from the get-go as a sustainable, zero-waste oasis, and not a daily avalanche of food-related garbage, like most stadiums.

Green from the ground up

Thanks to organizations like the 384-member (and growing) Green Sports Alliance, teams and stadiums of all kinds are making strides toward zero waste. The shift is sparing landfills millions of cubic feet of garbage each year, reducing energy and water use, and cutting down on carbon emissions. And the Bronx’s 47,422-seat Yankee Stadium is one of Major League Baseball’s greenest operations.

There was no need to convert the new stadium to a more sustainable profile: it was all baked in, right from the recycled structural steel and concrete aggregate used in its construction.The 31,000 square-foot Great Hall, through which most guests arrive, is built with massive open-air archways that allow for natural cooling and ventilation: no air conditioning required. The energy savings per game from this alone equals about 125 New York City apartments shutting off their air-conditioning for a summer day.

The savings don’t stop there. The stadium’s ultra-efficient plumbing fixtures spare about 3.1 million gallons of water each year, reducing water use by 22 percent. And automated building controls are calibrated to reduce power consumption of lighting and ventilation systems when not in use.