Dodgers Named Finalist for Humanitarian Team of the Year

Dodgers Named Finalist for Humanitarian Team of the Year

The Los Angeles Dodgers were announced as a finalist for humanitarian team of the year on Wednesday. See what other teams made the list and why the Dodgers were recognized. 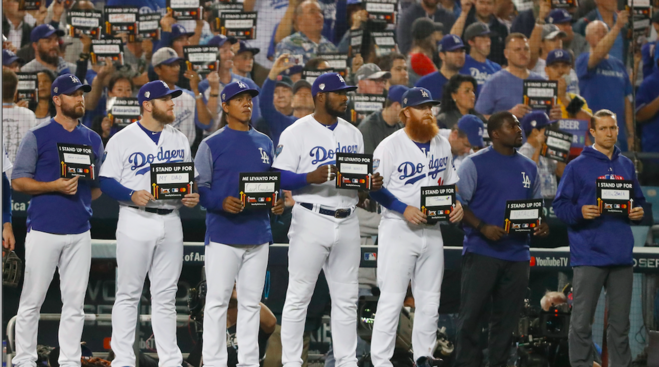 First place in the division. Check.

Finalist for the Sports Humanitarian Team of the Year Award. Check

The Los Angeles Dodgers have racked up a number of awards and accolades over the past few years, but it is the organization’s work off the field that garnered them recognition on Wednesday.

The Dodgers were named as a finalist for the Sports Humanitarian Team of the Year Award, an annual honor that celebrates the impact of teams, athletes, and sports industry professionals who make a difference in the world.

The Dodgers organization was specifically chosen for their work with the club’s official charity the Los Angeles Dodgers Foundation (LADF).

The LADF was founded in 1996, and is the official team charity of the Los Angeles Dodgers. The charity is an award-winning leader in sports-based youth development. LADF does a tremendous job harnessing the power of the Dodger brand, along with their passionate fan base, to significantly impact underserved youth in challenged neighborhoods throughout Los Angeles.

The charity’s mantra is “bigger than baseball,” and it is through that mentality that they focus on finding innovative ways to create opportunities for children through programs that engage with kids in sports, help kids stay active, and promote academic success.

“With an engaged ownership group chaired by Mark Walter, the Los Angeles Dodgers Foundation has a robust strategy focused on the most significant problems facing the city of Los Angeles at a time when a quality education, youth sports and health care are increasingly reserved for the elite,” said Nichol Whiteman, Chief Executive Officer of LADF. “Using our celebrity and the power of sport, we run and fund proven programs aimed at young under-resourced Angelenos. And we have bigger ambitions on deck.”

According to Whiteman, LADF and the Dodgers envision a city where every young Angeleno, regardless of neighborhood, has the opportunity to thrive. Since inception, more than $25 million has been invested in programs and grants to nonprofits to improve access to education, health care and sports.

LADF now administers and supports programs that prepare students for college; award scholarships; pay for eye screenings and glasses; inspire children to read; and use baseball and softball to build kids’ confidence and improve their lives.

In addition to the Dodgers/LADF, the other finalists for Humanitarian Team of the Year are the Anaheim Ducks (NHL), the Chicago Fire (MLS) and New York City Football Club (MLS).

The winner will be announced at the fifth annual Sports Humanitarian Awards presented by ESPN on Tuesday, July 9, 2019.