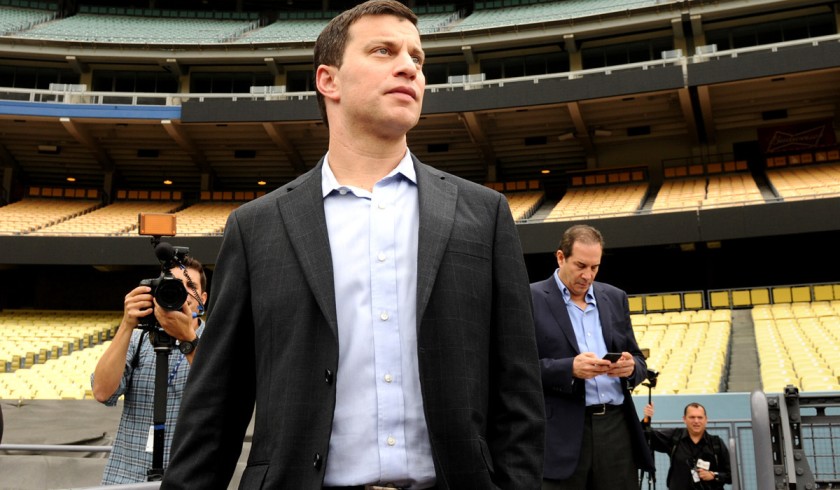 Dodgers president of baseball operations Andrew Friedman (above), manager Dave Roberts and their wives have been using the time off distributing meals to hospitals to feed front-line workers.(Wally Skalij / Los Angeles Times)

Andrew Friedman misses baseball. The thrills each day provides. The camaraderie the marathon cultivates. Even the losses.

“Kind of makes me feel alive,” he said.

The Dodgers’ president of baseball operations has spent the last two months working more as an accountant than a baseball executive since Major League Baseball suspended its operations. His days consist of phone and Zoom calls, communicating with his staff and checking in on players, unsure if they’ll have a season.

“When it’s safe and plausible, everyone’s interests are perfectly aligned to get back going and that gives me optimism for it happening,” Friedman said.

Friedman spoke over the weekend before MLB and its 30 owners on Monday approved a proposal to present to the players’ association. The proposal calls for a regular season between 78 and 82 games, no fans at least to start the season, and limited travel.

MLB also will propose players receive salaries based on a 50-50 split of revenues during the regular season and postseason. The union is expected to dispute the financial outline.

“Everyone involved appreciates that this, no matter what, will be a highly unusual season and just to make the most of it,” Friedman said. “And obviously it’ll be a strong signal for the entire country when we’re able to get back out there and play.”

In the meantime, Friedman has spent some of these uncertain times helping his community.

Friedman, his wife, Robin, along with Dodgers manager Dave Roberts and his wife, Trisha, have had meals distributed to local hospitals from two restaurants — Union in Pasadena and Bar Hayama in West L.A. — once a week since March. The plan was hatched from a video chat between the four after Roberts and his wife had begun a similar effort in his native San Diego area.

“We got word that the only thing available to them was vending machines,” Roberts said. “To help those front-line workers really was a no-brainer.”

Andy Otovic, who works in the Dodgers’ medical department, helped coordinate between the restaurants and hospitals.

“From our standpoint, we were able to accomplish two things with this,” Friedman said. “One was to help local restaurants and the another was providing great food to the people working on the front line during all of this.”

Friedman and his wife, who is on the board of Teach for America in Los Angeles, also have helped get tablets and hotspots into the hands of inner-city children to participate in distance learning. It’s a problem Robin, a former teacher, identified before the pandemic and knew would worsen with schools closed.

“Watching my kids at home, it would be impossible to learn without the resources,” Friedman said. “So we just wanted to do whatever we can for the education gap not to widen.”

It’s one of the many troubling realities spawned from the pandemic. Baseball’s shutdown pales in comparison, but its return would provide a welcome diversion for fans. For the Dodgers, it would give them a chance to win a World Series with a roster as talented as any in the majors.

“We have a highly motivated group,” Friedman said, “that’s excited about getting back out there when we’re able to.”