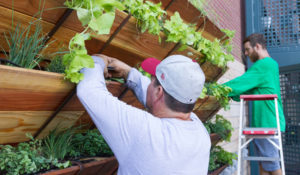 The Arizona Diamondbacks have added D-backs Greens, a vertical urban garden, sponsored by UnitedHealthcare, at Chase Field to provide sustainability and educational opportunities throughout the remainder of the season. D-backs Greens will be located on the northwest wall of the stadium, just outside the main gates and will be visible to all fans for the remainder of the season.

D-backs Greens will contain nearly 200 assorted herbs, including sweet basil, chives, garlic chives, lavender, oregano, rosemary and more that will change seasonally. The garden was designed and created by a local company, Flower Street Urban Gardens, and features 180-square feet of vertically-hanging planting space. With the support of UnitedHealthcare, the D-backs will use D-backs Greens as an educational tool to teach fans about sustainability efforts and encourage healthy eating. As part of the D-backs’ sustainability efforts, the team will utilize compost produced in part from organic material collected from ballpark kitchens to enrich and enhance the soil in the garden.

The Diamondbacks have also partnered with Coors Light to install a D-backs-logoed sculpture in the rotunda that will be filled with more than 1,000 Coors Light beer cans collected after D-backs games throughout the second half of the season to illustrate their combined recycling efforts.

Throughout the first half of the season, the D-backs have made significant strides in the team’s sustainability efforts and already this season have diverted more than 18 tons of organic material from the waste stream through a new organics collection program. Through 48 home games this season, the D-backs and Levy Restaurants have also donated more than six tons of unused concessions food to Church on the Street, which equates to roughly 10,000 individual meals that help people in need in the Phoenix community.