D.C. United is making a new addition to its leadership group, announcing Tuesday that Danita Johnson would join the club as its president of business operations. Johnson marks a milestone as the first Black president of an MLS club, and the third woman to hold such a role in the history of the league.

Johnson joins the club from the Los Angeles Sparks of the WNBA, where she was the president and chief operating officer. During her time with the Sparks, the team led the league in corporate sponsorship dollars earned and also saw a 50% increase in ticket sales from 2014 to 2017.

“After conducting a thorough search process, we are confident that Danita Johnson is the right person to lead our business and help take our club to new heights,” said Jason Levien, co-chairman and CEO of D.C. United in a team release. “Throughout her career, Danita has demonstrated the ability to develop a positive and inspiring work culture, and she has done a tremendous job connecting with the communities in which she has lived and worked. We are thrilled that she has agreed to join us at this critical moment in D.C. United’s trajectory.” 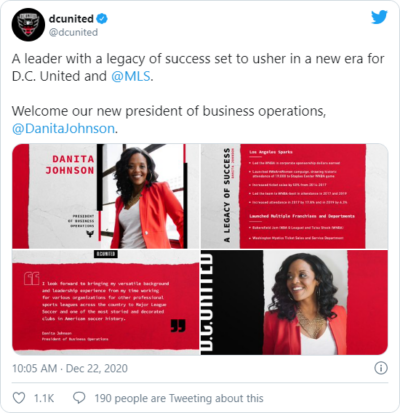 Prior to the Sparks, Johnson was with the WNBA’s Washington Mystics and Detroit Shock and the NBA’s Los Angeles Clippers, as well as the NBA G League’s Bakersfield Jam over her 15-year career in sports.

“I’ve learned a lot from my time with the WNBA, especially the Los Angeles Sparks organization,” Johnson said in a club statement. “It is my belief that establishing a winning culture off the field impacts every aspect of the business, from fan interactions to community engagement, and I am committed to doing just this for one of the most storied and decorated clubs in American soccer history.” 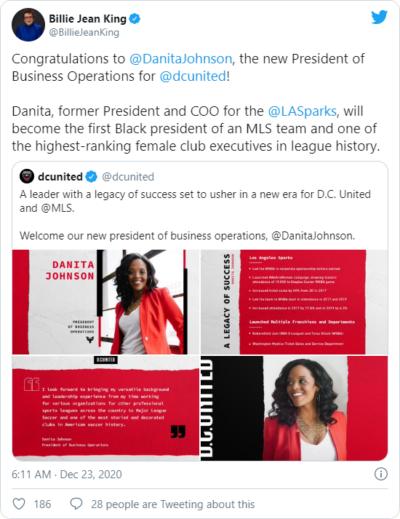 Johnson will begin her new role with D.C. in January.