David Stern: A Tribute to a Green Sports Champion

David Stern: A Tribute to a Green Sports Champion

By Allen Hershkowitz, The Sustainability Report 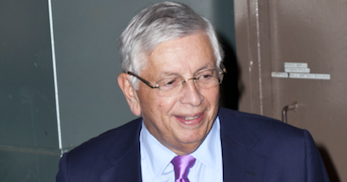 A week after the passing of the iconic NBA commissioner, Allen Hershkowitz remembers his leadership, foresight and empathy when the pair worked to establish the league’s pioneering sustainability initiative

In 2007, my colleagues and I at the Natural Resources Defense Council began collaborating with NBA  commissioner David Stern and members of his staff. Our goal was to create an NBA environmental initiative, which resulted in our creation of ‘NBAGreen’, the league’s successful sustainability programme. David Stern was one of the first sports commissioners to speak publicly about the need for climate action.

I watched Commissioner Stern inspire and mentor an extraordinarily diverse and talented group of NBA colleagues, encouraging them all to pay attention to the environmental challenges we face. Through his support for NBAGreen and the senior leadership he assigned to lead it, David Stern helped create one of the most influential environmental projects in the world. Not just in sports: in business, and in culture as well.

David Stern was a tireless champion for environmental health and justice. He believed in sound science, and was a transformative cultural innovator, two traits that led him to leverage the influential cultural and market platform of the NBA to promote environmental literacy.

A practical idealist, David’s top eco-concern was climate change. He allocated funds a decade ago to set up a system to calculate energy use and greenhouse gases at all NBA venues and events, and he supported fan education through animation, TV,  as well as social and traditional media.

Eco-ads about energy use aired on NBATV thanks to David and he encouraged all NBA teams, venues, sponsors and fans to recycle, compost, use eco-intelligent transportation and to think about shifting to renewable energy. David also supported the greening of the NBA’s premier events, including the All-Star Game, Draft, Playoffs and Finals.

David’s view of sustainability was broad, going beyond just the environment. Words can only belittle how committed David was to inclusive racial and gender diversity and equality – qualities that are now deeply embedded in NBA culture. He saw the need to authentically respect the evolving cultural empowerment of athletes and shifting demographics among fans. As a result, the entire NBA ecosystem is more racially and gender diverse than most leagues.

After he died, Kathy Behrens, NBA president for social responsibility and player programs, told me: “David always made things better.” I saw that, and I saw as well that he always wanted to help. I learned much from his natural style of servant leadership.

David Stern left a visionary legacy committed to service, to humanitarian purpose. His intelligent life was marked by probity, fairness, generosity, and success by playing by the rules. He was a blessing to many, and the NBA’s growing global commitment to sustainability will forever benefit from his vision of a green and peaceful planet. I wish he had lived longer. He had so much to offer, so much good. I join thousands who send condolences to Dianne and family.

Allen Hershkowitz is the co-founder and former president of the Green Sports Alliance, the environmental science advisor to the New York Yankees, and chairman and founding director of Sport and Sustainability International