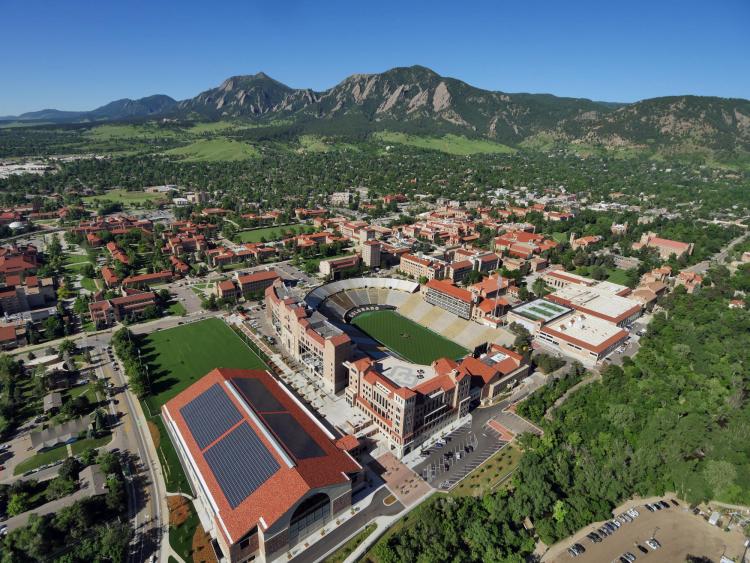 The University of Colorado Boulder became the first university in the nation to commit to the United Nations Sports for Climate Action Framework, bolstering its status as a sustainability leader. The University of Colorado Boulder Athletic Department signed onto the agreement last week, joining the International Olympic Committee, the Tokyo 2020 Summer Olympics, FIFA, the New York Yankees, the NBA and the Green Sports Alliance and others in the effort to raise awareness and inspire climate action.

Several major sports bodies partnered with U.N. Climate Change in December to launch the framework as a way to drive emission reductions among sports operations and tap the popularity and passion of sport to engage millions of fans in the effort.

“We’re thrilled to be an early adopter of the U.N. Sports for Climate Action Framework,” said CU Athletic Director Rick George. “This is consistent with the leadership and excellence expected by CU Boulder students, faculty, staff, alumni and fans as we confront the critical issue of climate change.”

The U.N. Sports for Climate Action Framework has two overarching objectives: to achieve a clear trajectory for the global sports community to combat climate change and to leverage sports as a unifying tool to drive climate awareness and action among global citizens.

Signatories of the framework commit to five core principles:

CU Boulder’s athletic department has long been a leader in college sports sustainability, having debuted the first NCAA Division-I athletics sustainability program in the nation in 2008, Ralphie’s Green Stampede.

Since that time, CU became the first major college sports program to implement a zero waste program in all gameday venues. In 2016, a major athletics facilities upgrade achieved LEED Platinum certification from the United States Green Building Council thanks in part to a net-zero-energy Indoor Practice Facility that boasts an 850-kilowatt rooftop solar array. The Athletic Department also has also made a push to reduce the use of pesticides on turf fields. Its basketball and volleyball practice facility was also built to LEED Platinum standards.

The Athletic Department’s commitment is aligned with campus sustainability values as well. In early 2018, the university joined 12 other major research universities as founding members of the University Climate Change Coalition (UC3), which has committed to mobilize members’ collective resources and expertise to accelerate local and regional climate action in partnership with businesses, cities and states. CU Boulder’s earth and atmospheric sciences, meanwhile, have been ranked No. 1 overall in global university rankings.

“Our Athletic Department’s commitment to the U.N. Sports for Climate Action Framework is just the latest example of the great work going on at our university to positively impact humanity through leadership and innovation in sustainability,” said CU Boulder Chancellor Philip DiStefano. “Athletics provides an excellent platform for raising the profile of these efforts and we’re proud to be at the forefront of this new framework.”