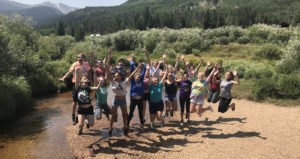 CSU’s Eco Leaders at a recent retreat at the Mountain Campus.

And for the second year in a row, CSU has been ranked first for public engagement in the 2018 Sustainable Campus Index, a publication of the Association for the Advancement of Sustainability in Higher Education.

“As a land-grant institution, we take our role in engaging students and the public in sustainability research and initiatives very seriously,” said Tonie Miyamoto, co-chair of the President’s Sustainability Commission. “The opportunity to provide hands-on learning opportunities and access to living labs on campus is very inspiring and helps us with outreach in our local community and across the state.”

In its 12th annual survey, Sierra received submissions from a record-breaking 269 schools in 36 states, the District of Columbia and Canada.

“We stay inspired by the creative and innovative ways colleges and universities across North America are working to tackle the climate crisis and move toward a sustainable future,” said Jason Mark, Sierra magazine’s editor in chief. “Each year, submissions to Sierra’s Cool Schools rankings shoot up — showing youth are increasingly engaged in driving change at a local level to circumvent our lagging federal leaders.”

Sierra made some changes to its methodology this year that included aligning it more with the scoring system used by AASHE. That’s the organization that gave CSU the first-ever Platinum rating in its Sustainability Tracking, Assessment & Rating System, or STARS, in 2015 – and repeated the honor in 2017.

According to Mark, the changes to the 2018 rankings methodology were made to limit the chance for errors in data input, increase alignment with AASHE’s existing scoring system, improve the integrity of the data used, and boost transparency of the entire ranking process.

“In 2018, we based our rankings on institutions’ existing STARS scores,” he said. “We then processed the STARS data through a custom-built formula that ranked the schools according to our own weighting criteria, which were based on Sierra Club priorities. As in past years, we also had a supplemental question about fossil-fuel investments.”