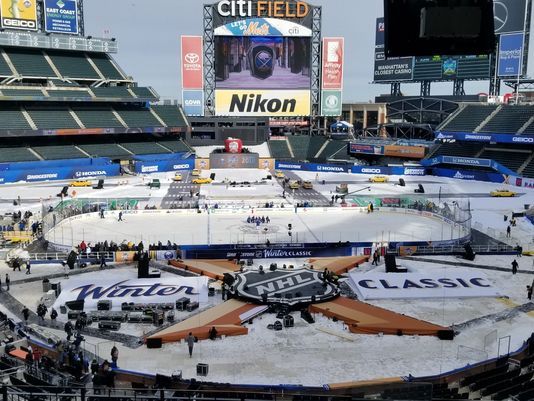 Hockey features glove saves, skate saves and stick saves — though these are nothing, really, next to the most audacious save on which the NHL has set its sights:

This may sound like a joke, at first. What does hockey have to do with environmental policy? Well, for one thing, the game is played on ice. And frozen ponds, where so many of the league’s players learned to skate, are in trouble. The average length of the skating season may shrink by a third in eastern Canada and by 20% in western Canada in coming decades.

That’s according to research in the NHL’s 2018 sustainability report, which will be released Wednesday morning. The report assesses the league’s own environmental impact and its commitment to fighting climate change.

“What I would say is when we do this work, we try to do it as apolitically as possible,” says Omar Mitchell, NHL vice president for corporate social responsibility, “because at the end of the day, as our commissioner would say, this is the right thing to do.”

More than a dozen federal agencies issued a report late last year that said humans are the dominant cause of a rise in global temperatures that has led to the warmest period in the history of civilization. That report said global average temperatures have increased 1.8 degrees Fahrenheit over the past 115 years.

That’s a period of time that encompasses the rise of hockey. The NHL celebrated its centennial in 2017 — and wants to be around for its bicentennial some 100 years hence.

“How we think about our environment and how we think about sustainability is going to be a critical element in making sure our sport has a future,” says Kim Davis, NHL executive vice president of social impact, growth initiatives and legislative affairs.

The NHL’s report is voluntary. “And what gives the report its teeth is that we did a carbon inventory” of the league’s own environmental impact, Mitchell says. “Hockey is a very energy-intensive sport. Our analysis shows about 66% of our carbon footprint is attributed to energy usage to create an ice sheet. So what we are trying to do is to promote innovations that will lower energy consumption within our buildings.”