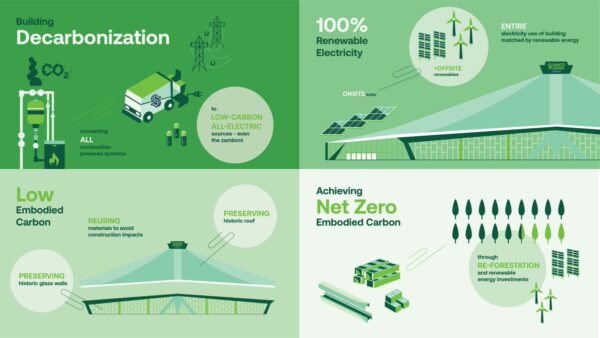 SEATTLE – Nov. 12 — Climate Pledge Arena and Oak View Group today announced that the arena has submitted its registration to the International Living Future Institute (ILFI) as it works to become the first arena in the world to be net Zero Carbon certified.

ILFI, a leading non-profit organization dedicated to advancing sustainable building practices, will now begin reviewing documentation provided by the arena, as well as twelve consecutive months of performance data once the building opens in 2021, to ensure it meets the net Zero Carbon standard.

“Registration with ILFI represents the next big step for Climate Pledge Arena on its road to achieving a net Zero Carbon certification,” said Jason F. McLennan, Founder of the International Living Future Institute and CEO of McLennan Design. “The arena is making major strides in energy efficiency, elimination of natural gas from the building and both on-site and off-site renewables that should achieve net zero carbon operating status in its first year of operation.”

“Climate Pledge Arena shows beyond a doubt that buildings of all sizes and uses can pursue net Zero Carbon certification,” said Shawn Hesse, Director of Business Development at the International Living Future Institute. “With this move, the project team is raising the bar for professional and collegiate sports arenas – and for other global organizations – by embracing independent verification of their climate commitments.”

The 18,100-seat multi-purpose venue located at Seattle Center is expected to host 200 events each year, including the NHL’s 32nd and newest expansion team Seattle Kraken, four-time WNBA world champion Seattle Storm, live music and entertainment from the world’s biggest stars, and City of Seattle community events. It is currently undergoing a transformation to construct a brand-new arena under the landmark Paul Thiry-designed roof.

“Amazon has an ambitious goal of reaching net zero carbon emissions across our own business by 2040, and we are thrilled to support the arena on its journey,” said Chris Roe, Head of Sustainable Operations at Amazon. “We’re excited by the arena’s progress, which will inspire climate action and set a new bar for sustainability in the sports and entertainment industry.”

The Climate Pledge, announced in 2019 by Amazon and Global Optimism, calls on signatories to be net zero carbon across their businesses by 2040—a decade ahead of the Paris Climate Agreement. In securing the naming rights of the historic arena in June 2020, Amazon named it Climate Pledge Arena as a regular reminder of the importance of acting to fighting climate change.

Construction on the arena is on track to hit major milestones by the end of 2020 in reaching its goals to be net Zero Carbon certified, including:

About Climate Pledge Arena
Climate Pledge Arena, located at Seattle Center, will be the first net Zero Carbon certified arena in the world. It will serve as a long-lasting and regular reminder of the urgent need for climate action. The Climate Pledge, which was founded by Amazon and Global Optimism in 2019, is a commitment from companies globally to be net zero carbon by 2040. The complete redevelopment of this historic landmark, originally built for the 1962 Seattle World’s Fair, will be an industry first. Home to the NHL’s Seattle Kraken, WNBA’s Seattle Storm, and the world’s biggest performers of live music and events, Climate Pledge Arena will open in 2021. Learn more at www.climatepledgearena.com.

About Oak View Group (OVG)
Oak View Group (OVG) is a global sports and entertainment company founded by Tim Leiweke and Irving Azoff in 2015. OVG is focused on being a positive disruption to business as usual in the sports and live entertainment industry and currently has 8 divisions across 4 global offices (Los Angeles, New York, London, and Philadelphia). OVG is leading the redevelopment and operations of Climate Pledge Arena as well as arena development projects in Belmont, NY, Austin, TX, Manchester, England and Milan, Italy. OVG Global Partnerships, a division of OVG, is the sales and marketing arm responsible for selling across all OVG arena development projects.

About the International Living Future Institute
The International Living Future Institute is an environmental NGO committed to catalyzing the transformation toward communities that are socially just, culturally rich and ecologically restorative. The Institute is premised on the belief that providing a compelling vision for the future is a fundamental requirement for reconciling humanity’s relationship with the natural world. The Institute operates the Living Building Challenge, the world’s most advanced, holistic performance standard for buildings. It is a hub for many other visionary programs that support the transformation toward a living future. Learn more at www.living-future.org.

About McLennan Design
McLennan Design is one of the world’s leading multi-disciplinary, regenerative design practices, focused on deep green outcomes in the fields of architecture, planning, consulting, and product design. The firm uses an ecological perspective to drive design creativity and innovation. McLennan and his team bring substantial knowledge and unmatched expertise to projects of all types around the globe. McLennan is the founder of the Living Building Challenge, winner of the Buckminster Fuller Prize and ENR’s National Award of Excellence. For more information see www.mclennan-design.com.