The Brazilian producers of Friday’s Opening Ceremonies at the Rio Olympics made climate change a significant focus of its pre-Parade of Nations pageantry. With a global audience estimated at 1 billion people, this is undoubtedly the most widely-viewed climate change message ever. This is the power of Green-Sports on steroids.

About an hour into Friday night’s Opening Ceremonies at the Rio Olympics, the 75,000+ people at the Maracana Stadium and the estimated one billion TV and online viewers around the world probably thought Al Gore had hijacked the production. That’s because they saw videos that detailed:

The message was as powerful as it was clear: The world must do whatever it can to stop climate change, and fast. 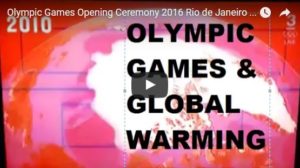 Video of the climate change portion of the 2016 Olympics Opening Ceremony in Rio. (Credit: YouTube)