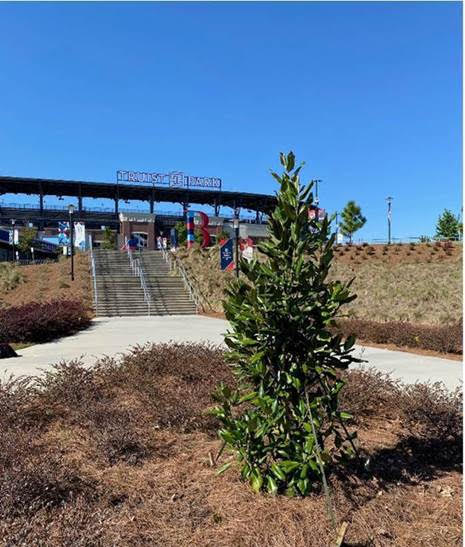 To celebrate Earth Day, the Braves added a piece of Atlanta baseball history to Truist Park with the planting of a seedling from a 113+ year-old Magnolia tree that grew in the outfield of Ponce de Leon/Spiller Park. Home to Minor League’s Atlanta Crackers and Negro American League’s Atlanta Black Crackers, when the ballpark opened in 1907, the magnolia was approved to remain inside the ballfield’s footprint. When balls landed in the tree, they were considered “in play,” and baseball greats including Babe Ruth and Eddie Mathews hit “home runs” into the tree. When Earl Mann took over the team in 1947, he did not want the tree in the outfield; however, instead of uprooting it, he moved the outfield wall in 50’. The original Grandiflora Magnolia tree is approximately 80’ tall and still stands at the Ponce de Leon/Spiller Park location at 650 Ponce de Leon Avenue.

The seedling, which has been nicknamed Maggie, was planted this morning by HighGrove Partners, the official landscaping company for the Atlanta Braves. The tree now stands on the corner of Circle 75 Pkwy and Windy Ridge Pkwy SE, where a marker will be installed in partnership with the Atlanta Botanical Garden to share information on the tree and the history of its origins. As Maggie grows, she will be a beautiful addition to Truist Park and a great way to preserve and educate fans on Atlanta baseball history.

Hear more about the project here