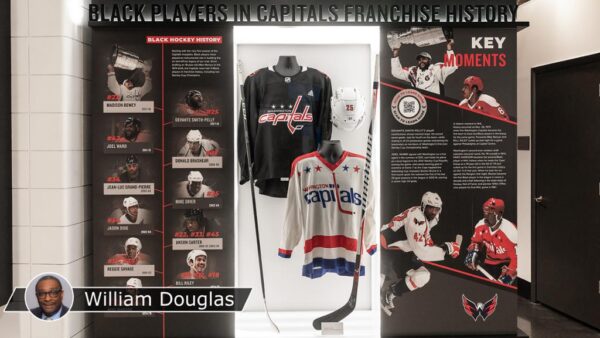 Marson, Ward, Smith-Pelly among those to have legacy part of tribute

The Washington Capitals are honoring the history and legacy of their Black players with a permanent display inside Capital One Arena.

Fans will get their first in-person look at the display when the Capitals host the Edmonton Oilers on Wednesday (7 p.m. ET; TNT, SN, TVAS, NHL LIVE). The unveiling is part of the Capitals’ celebration of Black History Month.

“I couldn’t be more proud to have this new permanent display donning our concourse for all guests — not just at our Capitals games — to experience,” Capitals owner Ted Leonsis said. “These incredible players and their stories are honored for their contributions to the NHL and for carrying the mantle forward to encourage more interest in the sport. As we aim to embody that hockey is really for everyone, we celebrate this important step in commemorating hockey’s rich history.”

The display, located behind Section 116 of the arena’s main concourse, salutes the contributions of the 11 Black players who have played for the Capitals since the team joined the NHL in 1974. 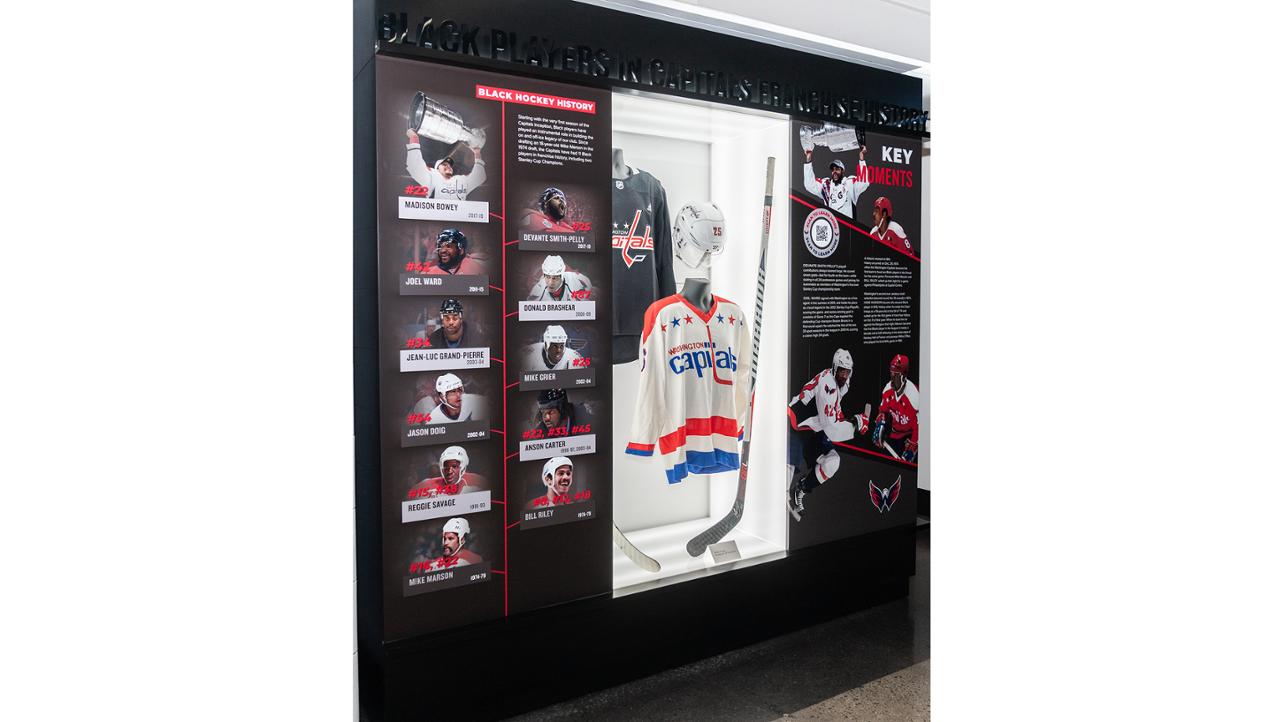 The display has a timeline and key moments in Capitals history, and an interactive QR code that sends visitors to washcaps.com/blackhockey for additional information about the Capitals’ commitment to diversity, honoring Black players in history, resources and more.

“It’s amazing that they’re acknowledging the Black players that came through the organization with such a great tribute,” said Ward, an assistant coach with Henderson, the Vegas Golden Knights’ American Hockey League affiliate. “I think it’s great for kids of color to see that. So inspirational. I wish I had something like that when I walked through hockey rinks growing up as a kid.”

Riley, who was the third Black player in the NHL and a teammate of Marson’s, said, “It’s a tremendous honor that the Washington Capitals would recognize their Black alumni in such a genuine way.” 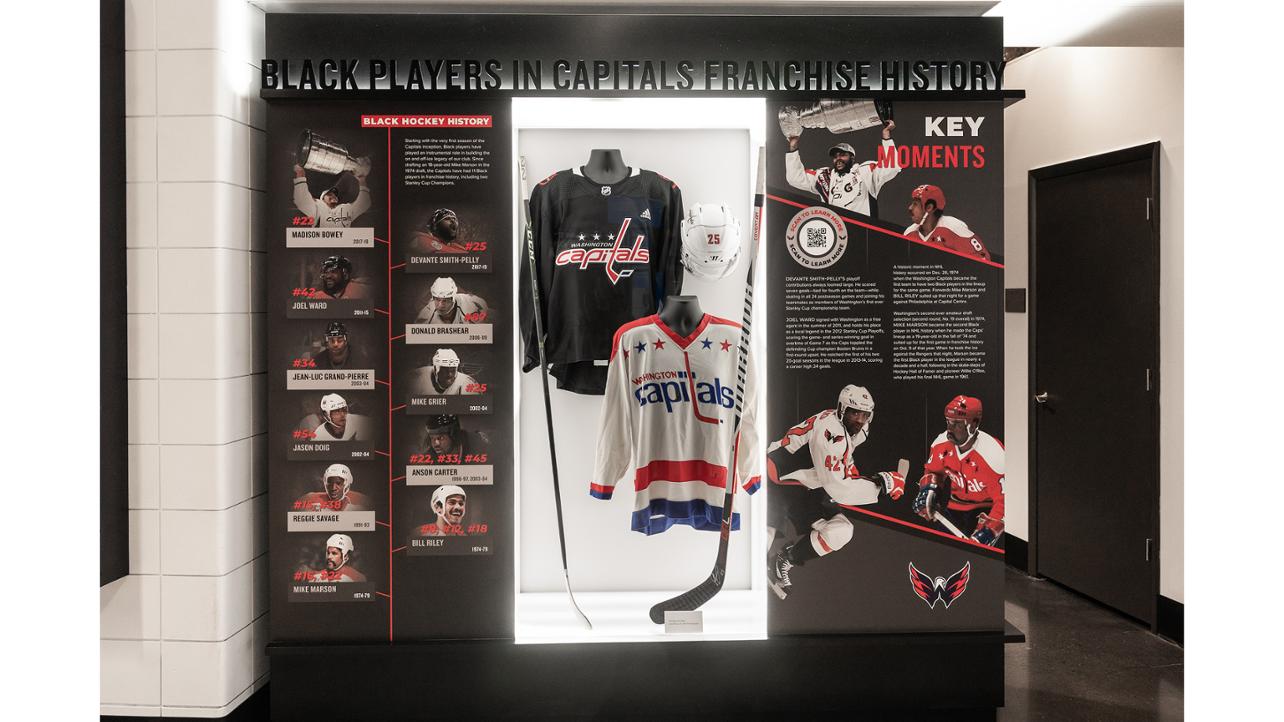 Black players have been at the center of some of the Capitals’ most iconic moments.

Smith-Pelly scored eight points (seven goals, one assist) to help the Capitals win the Stanley Cup in 2018, including scoring a third period game-tying goal against the Golden Knights in their 4-3 Cup-clinching Game 5 win.

Ward earned a spot in Washington sports lore for his Game 7 overtime goal against the Boston Bruins in the 2012 Eastern Conference Quarterfinals.

Ward also has a stick in the Smithsonian’s National Museum of African American History and Culture’s Black hockey exhibit. 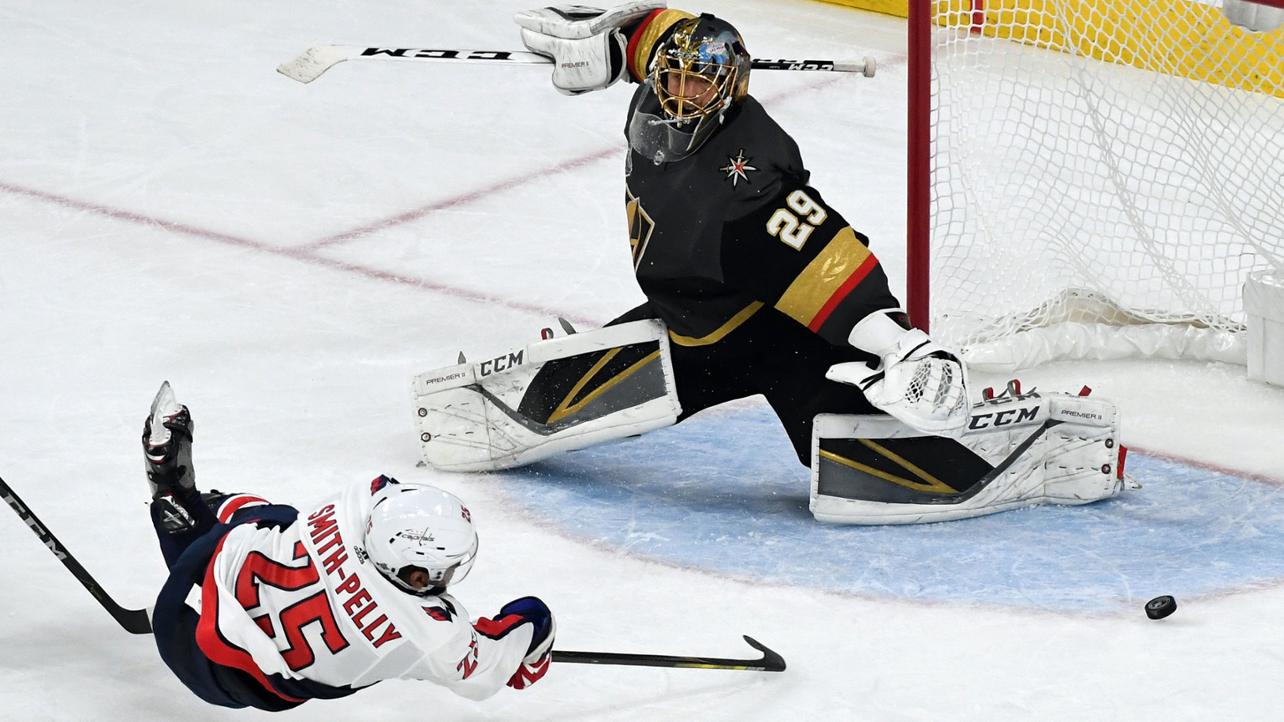 Savage has his stick and No. 15 Capitals jersey on display in the Hockey Hall of Fame in Toronto after he became the first player in NHL history to score his first goal on a penalty shot, Nov. 18, 1992 against the Minnesota North Stars in a 3-2 Washington win.

Marson became the first Black player drafted by an NHL team when Washington selected him in the second round (No. 19) of the 1974 NHL Draft.

The rookie left wing was Washington’s third-leading scorer in their inaugural season with 28 points (16 goals, 12 assists) in 76 games. He last played in 1979-80, and in six NHL seasons with the Capitals and Los Angeles Kings scored 48 points (24 goals, 24 assists) in 196 games. 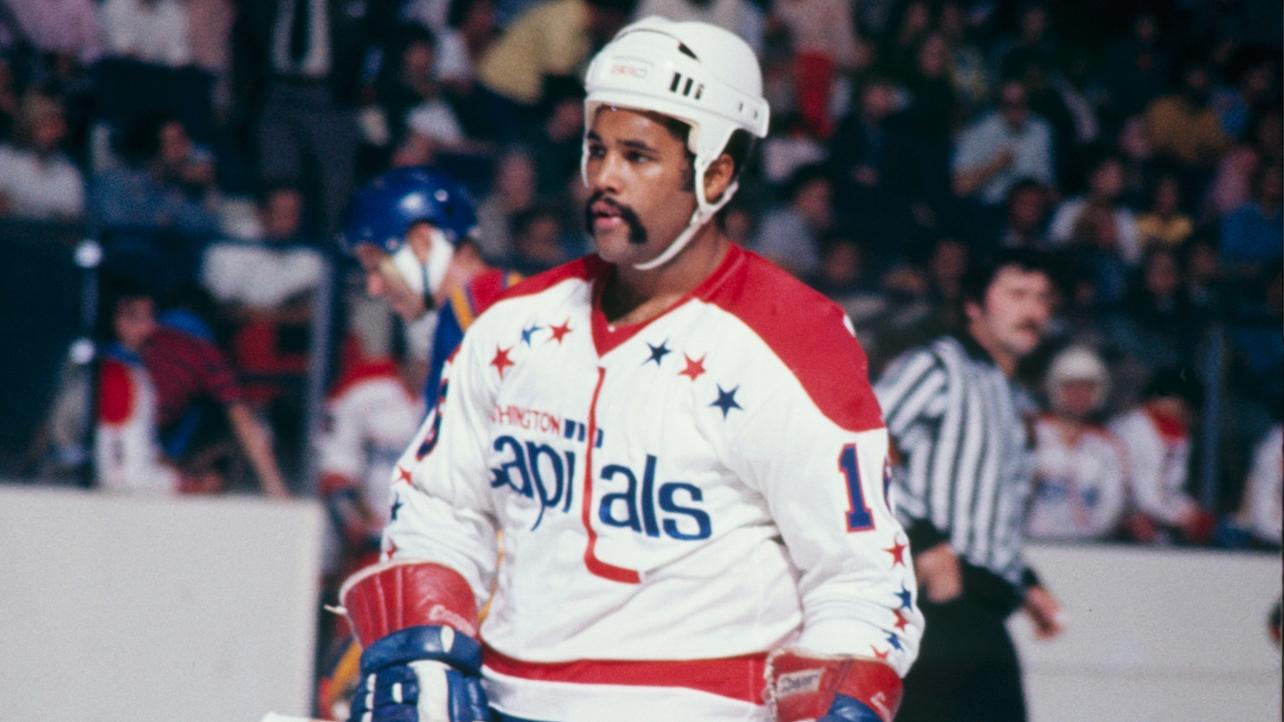 Carter, who played 38 games in two stints with Washington, praised the Capitals for being intentional in acknowledging the contributions of their Black players.

“I remember when Mike Marson played there, you really didn’t hear much about him,” he said.

Bowey, a Vancouver Canucks defenseman, said being part of the display makes him more appreciative of his tenure with the Capitals, who selected him in the second (No. 53) of the 2013 NHL Draft.

“I think about my time there every day, just being blessed to play with the players I got to play with and just being part of that history,” he said. “Obviously the cherry on top is winning the Stanley Cup, which is something I’ll never forget.”