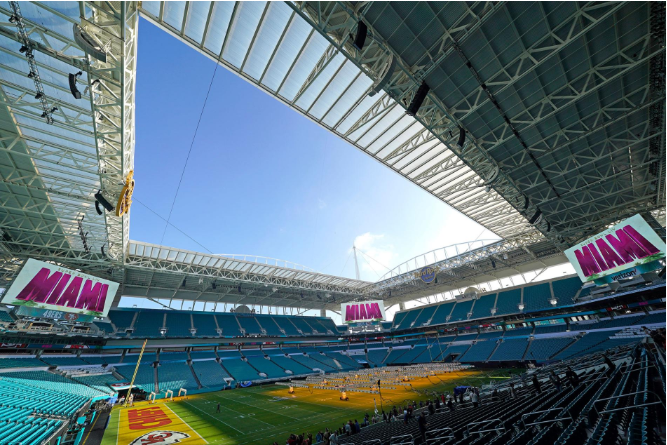 This Sunday, Miami’s Hard Rock Stadium will try to eliminate its need for a landfill.

Ten thousand hot dogs, 20,000 pounds of shrimp, 8,000 pounds of short ribs—and that’s only a portion of the food that will be made by the 2,500-strong culinary staff flying into Miami this weekend to prepare snacks for one of the nation’s biggest game days.

Super Bowl 54, this year played in Miami’s Hard Rock Stadium, will see the Kansas City Chiefs face off against the San Francisco 49ers. Nearly 100 million people watch the Super Bowl every year, in bars, at house parties, and for a lucky few, in the stadium, where tickets start at $4,000.

The game is a time to indulge in food, alcohol, and entertainment, but can the game fuel a conservation message too?

This year’s game, like last year’s and the year before, aims to divert trash away from a landfill. Different organizations define zero waste differently, from completely eliminating waste to keeping all waste out of landfills through recycling, composting, and source reduction. Some organizations, like this year’s Super Bowl, adopt these strategies and burn excess trash for energy, a concept called “zero waste to landfill.”

As businesses and municipalities grapple with the plastic pollution scientists say is causing a global crisis, sporting events are rapidly implementing new initiatives that reduce their trash, and stadiums are becoming helpful testing grounds. If zero-waste initiatives were structured like governments, stadiums would be dictatorships, where one entity mandates what vendors can sell, how they package it, and what happens to items when they’re tossed out.

How are they doing it?

The game’s organizers say the average NFL game generates 80,000 pounds of trash. That can double during the Super Bowl.

If everything goes according to plan this Sunday, all of that waste will go to a recycling center, compost facility, or a plant where it will be burned for energy.

The aluminum cups aren’t just a Super Bowl gimmick. They’ll help the stadium phase out 99.4 percent of its single-use plastic this year, says Paul Pettas of Centerplate, the stadium’s food and beverage partner.

“Any event that goes on at the stadium, we’re the exclusive caterer,” says Pettas.

This gives Centerplate an incredible amount of control. They’ll bring in local vendors like Boca Raton’s Old School Bakery and LadyFingrs Popsicles, as well as staffing a large culinary team to make game day food on site. But ultimately, Centerplate has the final say in what’s sold and how it’s served. Switching to aluminum cups, he says, will help the stadium cut back on half a million plastic cups this year.

All utensils will be made of compostable materials like bamboo. What’s left for the landfill are items like plastic film used to bag supplies or polystyrene. Every trashcan in the stadium will feature composting and recycling options, which the stadium hopes will make it easier for people to recycle.

“Being in a stadium setting, we’re able to control a lot of the program and design,” says Pettas.

A Super Bowl, however, is unlike a regular game. Ticket prices are higher, and clientele expect a more premium experience.

“There are fewer options but more quality options,” Pettas notes. Stadium gates will open earlier, he adds, and people generally stay there for longer.

Pettas says the small percentage of single-use plastic generated by consumers at the game will include souvenir cups, ifce cream containers, and reserved plastic items like plastic straws for people with disabilities.

“Most stadiums make people throw everything away. You can’t bring your own stuff in. You have this very distinct border between the outside world and what’s happening within the stadium,” he says. “There’s a lot of control as long as the vendors are on board. It would be much more difficult in the real world.”

He notes that similar tactics on the university’s campus were less effective because only stadiums allow for such strict control.

When cities want to mitigate the amount of trash they’re sending to landfills, stadiums are one of the most effective venues to target. In 2011, Ohio State University decided to make its stadium zero waste. They’ve since been able to keep as much as 93 percent of waste out of a landfills in a single game.

“One thing Ohio State has learned in operating zero waste at Ohio Stadium since 2011 is that the practices that work well in a controlled event, such as an Ohio State football game, do not necessarily work across other sectors of even our own campus,” says OSU sustainability coordinator Graham Oberly in an email.

Most of the single-use items served inside the university stadium are compostable or recyclable, but when campus waste was audited, they found that most items tossed in traditional trashcans were objects people brought from home.

But while the zero-waste tactics used in stadiums may be difficult to translate to a campus, Hottle says they can be useful examples for other venues like zoos, museums, and movie theaters.

A growing movement at stadiums

Perhaps the most useful lesson for this year’s Super Bowl can be learned from 2018, when 90 percent of the waste thrown away at the U.S. Bank Stadium in Minneapolis was sent to a composter or recycler.

Many of the food containers were compostable, says Bradley Vogel, then the stadium’s sustainability director. On actual game day, they had a team of “bin guards” sponsored by Pepsi who stood next to waste receptacles to make sure fans were throwing their items in the right bin. Contamination is one of the biggest roadblocks to making the game zero waste.

U.S. Bank Stadium also performs an audit of the waste that ends up in its dumpsters.

“It’s an expensive, time consuming process,” says Vogel. “It takes about three days normally, and for that it took five and a half to six days to do it.”

Vogel says the auditing process would have taken even longer without close monitoring: “In the end, the bin guards were what made that successful.”

Consumer education is one of the biggest challenges to pulling off a trash-free Super Bowl, but it’s also where environmental groups are enthusiastic about what the game can offer.

“There really is no bigger stage than the Super Bowl to bring folks around the conversation,” says George Leonard, the chief scientist at the Ocean Conservancy, which has been serving as an advisor for conservation projects surrounding the game.

In his research, Hottle similarly found that fans with knowledge of how to properly dispose of their trash could be the key to successful waste diversion at ASU.

“If you’re asking the consumer to identify the trashcan, it has to be easy,” says Hottle.

Their study found that one of the most effective strategies for contamination was emphasizing the difference between what consumers drink and eat. Beverages generally come in recyclable containers, while food is served in compostables because recyclable plastic food containers would have to be cleaned to be processed.

Recyclable containers shaped liked bottles with circular, beverage-shaped openings stood next to compost bins, signaling to consumers what went where without much educational effort.

This general division of recyclables and compostables was true in the 2018 Super Bowl too.

“I think the best way to go about it is to say, ‘if you drink from it, it’s recyclable, if you eat from it it’s compostable,’” says Vogel.

“It’s all been a gradual push and accelerated in the past few years,” says Pettas.

It won’t be just the trash in Miami’s stadium that will receive extra scrutiny. Prepared food left uneaten will be donated to Food Rescue US, an organization that helps recover food waste for people in need. Kitchen oil will be recovered for biofuel, seafood will be sourced locally, stadiums are lit with energy-saving LED lights, and mobile tickets are being encouraged to cut back on paper.

Pettas says he thinks these considerations could leave this year’s Super Bowl with one of the lowest carbon footprints ever generated by the game.

Sixty-five thousand people are expected to fill Hard Rock Stadium on Sunday, and thousands could be learning about single-use plastics for the first time.

“You can reach a lot of individuals who don’t necessarily care,” says Vogel. “Overall it’s a way to show people that if we can do this here, you can do this at home.”