Can the Best New Female Racer Make It to Nascar? That’s the $15 Million Question

Can the Best New Female Racer Make It to Nascar? That’s the $15 Million Question

Julia Landauer is just what the sport needs, yet she’s still scrapping for sponsors. 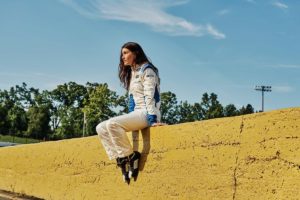 As soon as she could see over the steering wheel, Julia Landauer switched to cars, and it was good. Up to that point, she had been racking up trophies as one of the country’s best young go-kart racers; at 13 she was finally able to see out a car’s windshield while also working its pedals, so off she went in 2005 to the famed Skip Barber Racing School. She took immediately to the upgraded complexity, and speed, of a vehicle that had a clutch and could do 120 miles per hour, and the next year, at 14, she became the first female champion in the 31-year history of the Skip Barber Series, a launchpad for professional racers.

As is the case with all child racers, Landauer’s expensive hobby was funded by her parents, a doctor and a lawyer who got all three of their kids into go-karts because, her father decided, racing was one of only three sports that allowed boys and girls to truly compete on equal footing (archery and sky diving being the others). “The goal was just to get them to take responsibility, to get used to functioning under a little bit of pressure, and to have fun,” says Steve Landauer (he’s the doctor). The Landauers also liked that racing taught their girls to “not succumb to a lot of the social norms about stepping out of the way,” adds Tracy, her mom.

But the Landauers had no idea how talented their oldest child would be until she started winning races—and then didn’t stop. Even before Julia won the Skip Barber Series, she had decided she was going to be a professional driver someday. “By the time I was 12, I was like, ‘I could do this forever,’ ” she says.

And that posed a problem: If Julia really did stick with it, becoming a pro racer was likely to take years and cost tens and perhaps hundreds of thousands of dollars just to get to a point where she might start earning money. The Landauers were happy to support their daughter and would keep contributing to the best of their ability, but they weren’t about to go broke doing it. So they began an open dialogue that put some of the onus on her. If Julia wanted to keep racing, she’d eventually have to figure out a way to supplement the costs.