Can Sport Help the Public Understand the Effects of Climate Change?

Can Sport Help the Public Understand the Effects of Climate Change?

It has been argued that grave consequences of climate change are rarely presented to the public in a simple, emotive way. Can sport and its athletes help streamline the message? 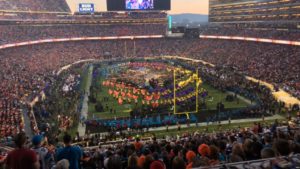 SPORTS TEAMS AND ATHLETES CAN PLAY A SIGNIFICANT ROLE in communicating the catastrophic effects of climate change to the public in simple terms, while cutting through the “partisan” nature of the debate in the US.

According to David Fenton, the communications expert specializing in environmental and human rights campaigns, personalities from the world of sport and entertainment should use their profiles and connection to the public to communicate the perils of global warming using “simple, visual, emotional language”.

Scientists, he said, “love complexity” and “hate repetition” when presenting climate information to the public, but only the “repetition of simple messages” changes the brain and public opinion. Fenton added that sports teams could use their social media channels, as well as appropriate junctures during a game, to deliver these simple messages.

“I’m not privy to the data of what fans will accept, but when I go to games during half-time there’s ‘support this charity, help these kids, donate to this medical cause.’ The model, it seems to me, could work,” he explained during the Sport and Climate Change Summit in New York.

“We have it in New York. A bunch of people trying to recover from Hurricane Sandy moved here from Puerto Rico because it was wiped out. Now it’s happening in North Carolina. So I think if charitable causes helping those victims were presented, and we inserted ‘we are making the Earth hotter and the storms stronger, and we need to think about that’, I’m sure there are ways to do this.”