Building ‘Bridge’ to Communities of Color

Building ‘Bridge’ to Communities of Color 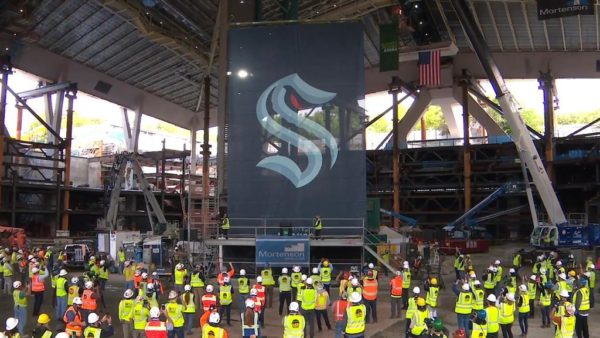 Amid the announcement of the team name, logo and colors, Seattle Kraken reaffirms intention to give back, advocate and be engaged with BIPOC youth

The Seattle Kraken is the latest professional team in town. No longer NHL Seattle, the 32nd franchise now has a name and a logo to rally behind.

Team executives such as CEO Tod Leiweke and marketing vice president Heidi Dettmer talk about authenticity and nobility as two essentials characteristics that the team name and logo seek to embody. The success of meeting that expectation extends beyond the color palette and design. These words represent values of the franchise.

As it turns out, the two values also mark current times. Because of the coronavirus pandemic and the rise of conversations about racism and social justice, an authentic and noble approach to work and life is important, especially as the future of sports and much else in the world is a mystery.

“We pledge now to always embrace the passion of our fans and to always listen,” said Tod Leiweke at Climate Pledge Arena Thursday morning as part of the name announcement. “We hope today is proof-positive that we continue to honor that passion, a passion to build the next great franchise, a passion to bring the Stanley Cup back to Seattle.”

What is the right amount of listening and action amid the two currents crises? That is a question the National Hockey League is grappling with and the Seattle Kraken can answer with authenticity and nobility. At a time where so much is at stake to keep young people healthy, fed and educated in a safe environment, sports organizations and teams likely recognize there is an altered perspective about athletic competition.

“I feel like if you’re knee-deep in it, you’re probably not caring about sports coming back,” said Rell Be Free, co-founder of Washington Building Leaders of Change or WA-Bloc. “I don’t have two hours to sit down and watch a basketball game. And I loved that, even months ago it was something I would do.”

“Through Freedom Schools, there’s particularly stories and narratives we uplift as far as individual people who are willing to live on that intersection of justice and their sports career,” said WA-Bloc co-founder Laura Wright. “But as a collective, sports isn’t really something that’s been on my radar at all.”

It is a delicate balance, to lean on sports to encourage a community while not tipping the scales to be insensitive to the harsh realities of the world. Kim Davis, NHL executive vice president of social Impact, growth initiatives and legislative affairs, joined Thursday’s Seattle Kraken special livestream to discuss how professional hockey will approach return to play on the ice and engagement with the community. The NHL plans for 24 postseason teams to travel to Toronto an Edmonton, 12 in each city, this weekend to enter a protected “bubble” zone of arena, practice and training facilities and lodging. Games are proposed to begin Aug. 7 in pursuit of the 2020 Stanley Cup.

“The National Hockey League is understanding that both the racial and social justice movement is manifesting itself throughout our league,” said Davis. “I think you will be amazed to see how that is going to manifest itself with the return to play and our recognition of not only frontline workers who just really put themselves on the line across North America but also those social justice warriors on the frontline of change. The NHL is serious about not only advancing greater inclusion and diversity but putting a stake in the ground about eradicating racism. We’re going to be unequivocal about that.”

The Kraken will not hit the ice or even have any players until the second half of 2021 but is already prioritizing an ongoing pledge to engage in the community and stand community activists.

Upon releasing the first Kraken swag, the franchise announced all net proceeds from the releasethekrakenstore.com will benefit nonprofits YouthCare, Community Passageways and the Urban League of Seattle for sales through Aug. 21.

“I think right now, more than ever, it is so important to have a strong message behind everything we do,” said actor Lana Condor, who appeared early in the livestream to help unveil the commemorative line of “Release the Kraken” merchandise.

“If you’re from Seattle, our number one thing is to give back and to support each other,” said Condor. “Having the team lead the way by giving back and supporting communities of color is really something special.”

YouthCare is a local organization that serves homeless youth in Seattle. The Kraken has a formalized relationship to support YouthCare. For 46 years, YouthCare has worked to create a Seattle community in which the mission is no young person experiences homelessness. It also is is intent on dismantling the systems that oppress youth of color. During the COVID-19 pandemic, the organization has focused and worked diligently to ensure homeless youth can remain in good health.

“When you’re talking about homeless youth, it’s hard to shelter in place when you don’t have shelter,” said Mari Horita, Seattle Kraken vice president of Community Engagement and Social Impact during a livestream session with YouthCare CEO Melinda Giovengo.

During the current pandemic, YouthCare has partnered with other organizations to run three facilities that focus on full care 24 hours a day: shelter, feeding, education, entertainment and employment support. This is in addition to the other 24 shelter and housing programs the nonprofit manages across Seattle.

The women and men working on Climate Pledge Arena have kept the project on schedule amid a health pandemic. The Seattle franchise took time out Thursday during the team name announcement to honor them.

“At the end of the day, the men and women who are building it deserve enormous credit,” said Kraken CEO Tod Leiweke. “So today we are announcing the first event we will ever have in the building will be for them and their families. We feel amazing kindred spirit with these men and women. And we should. We’re building the most beautiful arena in the world, the most sustainable arena in the world, and we’re generally on track.”

Time and again, the Seattle hockey franchise has been praised for doing things differently. From diverse hiring to thoughtful activations around Pride and Black History. There are lots more community-first opportunities ahead.

WA-Bloc’s Wright hopes pro teams pay attention to the advocacy and policy change communities: “I think there’s a real opportunity for the NHL to use its platform to uplift what grassroots organizers and activists have been carrying for so many years. I think we’re at a really important moment in history, particularly in our city right now.”

The Seattle Kraken franchise has been listening, said Giovengo on the livestream. While merchandise proceeds will benefit YouthCare through August 21, the Seattle Kraken made a long-0term commitment to the organization. Giovengo said she believes that makes this partnership stand out.

“Of course, there is financial support that they have pledged to us for the next 10 years and the reality is, that’s great,” said Giovengo. “But the most important is the idea that we’re going to be part of community development and our young people to have the opportunity, to learn skills and be part of this civic engagement in our community.”

The Seattle Kraken and Oak View Group committed $10 million in cash and in-kind donations over the next decade to YouthCare. That is in addition to the job training and employment opportunities the partnership will bring to youth struggling with housing security. On one of its biggest days as a franchise to-date, the Seattle Kraken re-committed to the community with the donation of all net proceeds of the first line of merchandise sales.

“Community is at the heart of this organization,” said Kyle Boyd, Seattle Kraken director of youth and Community Development during the announcement. “Sports can be the perfect stage to gather with friends [even virtually], to celebrate with family, and to learn from others. I know the Kraken is a seafaring creature, but this team will also serve as a bridge connecting people.”