Mark Davis used to be a professional basketball player for the NBA. But what he most wants to be known for is bringing solar power and jobs to low-income neighborhoods.

His company, WDC Solar, not only provides free solar energy to low-income residents in Washington, D.C., but it has also created close to 20 jobs in the area — with pay that starts at $15 to $23 an hour. 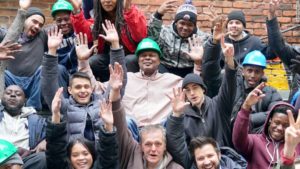 Mark Davis (center) is not only bringing free solar power to low-income neighborhoods but he is also creating jobs.

“It’s a great way for people with just a GED to get into an industry that’s growing rapidly and do well for themselves — if they are willing to work hard,” said Davis.

Another added bonus: Davis said residents save 30% to 35% on their energy bills after solar panels are installed. “It’s money that is staying, going towards groceries, medication, education,” he said.

Davis founded WDC in 2009 after realizing that it was mainly wealthy people who could afford the upfront cost to install solar power and they were reaping the added extra reward of hefty tax credits for using the renewable energy. “They were wealthy and taking advantage of incentives to pay off the installation over the years,” he said.