At 19, Michael Doyle was slammed into a goalpost while playing with the Victoria Cougars. It was a time when goalposts were fixed in the ice. The resulting injuries were serious and cut short the career of the up-and-coming goalie.

Today, Doyle, 48, has found his way into two major hockey franchises, albeit on a different side of the glass. He has parlayed his love of hockey, along with a passion for the hospitality industry, into top-tier positions as executive vice-president and arena general manager for Canucks Sports & Entertainment (CSE) and president of Toptable Group. 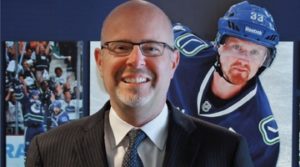 As the Vancouver Canucks go into the 2015-16 season, CSE is planning celebrations to mark 20 years since the opening of Rogers Arena (then GM Place). Making sure every game, every event and every retail outlet runs smoothly falls to Doyle. That means taking care of the approximately 1.3 million visitors to Rogers Arena every year – and that’s just up his alley.

“I’m someone that likes to see people happy,” Doyle said. “When you have a restaurant and you see people come down for two hours, you have the opportunity to make their night and change their lives. That excites me.”

Doyle comes to his positions with a background of many years filled with restaurant and event management, starting as far back as the age of four, he says, when he ran his own lemonade stand. Through his teens, while pursuing hockey, he worked in restaurant chains like Boston Pizza and The Keg. After his injury, he continued in the hospitality industry, working at Blackcomb Mountain and then landing a job as area manager, food and beverage, at the Walt Disney Co. (NYSE:DIS) for five years.

Jeff Stipec, vice-president of hospitality for CSE, has been Doyle’s friend and colleague going back to the 1980s, when Stipec, as general manager at the North Vancouver Keg, was his boss.

Stipec, who also worked with Doyle at Blackcomb in the 1990s, put his friend’s name forward when he heard of the need for “bright young talent” at Maple Leaf Sports & Entertainment, owner of the Maple Leafs, the Raptors and Toronto FC, as well as the Air Canada Centre, BMO Field, Maple Leaf Square, Real Sports Bar and Grill and Real Sports Apparel.

“He’s a pretty big thinker,” Stipec said. “Considering Real Sports in Toronto, there were millions of dollars at stake. He’s bold in those decisions. When a lot of people might back away, Michael just steps right up and he’ll make the decision with confidence, and because of his decision-making, his track record of success is pretty strong.”