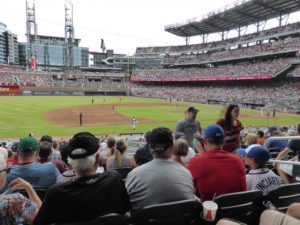 Atlanta is booming as a sports destination with a stunning new NFL stadium and baseball park already in operation, while a redeveloped NBA arena is set to open this autumn.

And the city hosted two major conferences this week, with hundreds of delegates attending the Association of Luxury Suite Directors (ALSD) annual event and the Green Sports Alliance Summit.

Delegates at the ALSD’s Design & Build Forum heard how the Philips Arena is undergoing major renovations to turn it into a fabulous new venue for the NBA’s Atlanta Hawks.

“The arena opened back in 1999 and at the architect at the time thought it was a great idea to build what was essentially a giant wall of suites on one side of the building with premium seats down below that. It was innovative at the time, but doesn’t really fit with what today’s fans want from their experience.”

Steffanson said the ownership team looked into knocking the venue down and building a new one, but that it made a lot more financial sense to to go through a three-phase renovation project. He said:

The overall project is a $200 million renovation involving gutting the entire building and building it back up. It’s a focus on technology, food & beverage and re-imaginging the fan experience.”