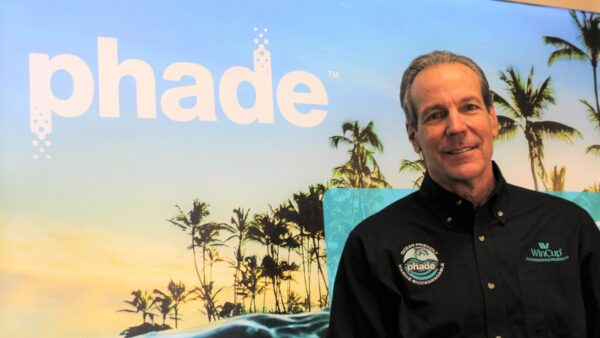 A few months ago, Michael Winters, the president of Stone Mountain-based WinCup flew west to visit SoFi Stadium in Southern California, the site of this year’s Super Bowl.

He was there to show off his company’s blue Phade straws, which are made of a material that feels like plastic, but is compostable and actually biodegrades in a matter of weeks.

“I had a great meeting with the sustainability folks out there,” Winters said. “And by the time I got back to Atlanta, they already had a message back to me that we’re going to be the only straw and stirrer allowed.”

Winters calls the idea of the product being used at the Super Bowl “surreal”. He says the company originally thought about waiting until the pandemic was over to launch the straws, but decided to move forward anyway.

Mercedes-Benz Stadium started using the Phade straws this past season along with Lambeau Field in Green Bay and Gillette Stadium in Massachusetts and dozens of other pro and college venues.

WinCup also has deals with several national and regional restaurant chains along with concessionaire Delaware North.

“Every single week it seems like we’re adding another critical chain somewhere across the country,” said Winters.

The Phade straws are made from PHA, which, according to WinCup is “derived from the fermentation of canola oil”. With plastic waste considered a major contributor to climate change, ditching regular petroleum-based plastic straws has become a priority for many.

And with more than 70,000 fans expected to attend Sunday’s Super Bowl and tens of millions more watching on television, the Super Bowl can provide a prominent stage for the product.

“Obviously, when you get to the Super Bowl, you’re at the pinnacle of getting people’s attention,” said Scott Jenkins, a former executive with the Atlanta Falcons who now chairs the Green Sports Alliance,  a trade organization that helps professional sports teams and leagues collaborate on ideas for sustainability.

He says when the alliance began, it was only a small group of teams in the Pacific Northwest. He points to Climate Pledge Arena in Seattle, Footprint Center in Phoenix and Ball Arena in Denver as evidence that sustainability efforts are spreading throughout the sports industry.

“Who would’ve thought that when we started the organization 12 years ago, we would have naming-rights deals that are built around sustainable brands and sustainable messages,” said Jenkins.

“The sense of urgency that all of us feel – not just the sports industry but fans and business in general realize that business-as-usual is not going to cut it,” he added.