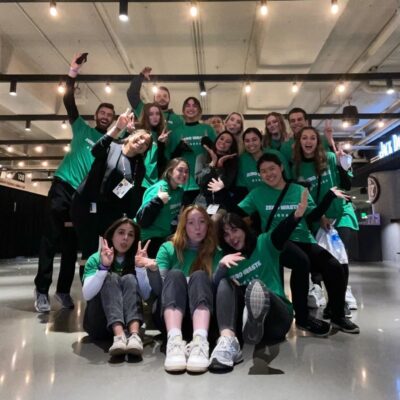 ATLANTA – Following the release of her album ‘Happier Than Ever,’ Darkroom/Interscope Records artist Billie Eilish made a stop at State Farm Arena for the first leg of her ‘Happier Than Ever, The World Tour.’ Thousands of fans attended the sold-out show at Atlanta’s award-winning venue for the tour’s second stop, and the venue today announced that approximately 92 percent of fan-generated waste was diverted from landfills by either being recycled, donated, composted or reused.

“We are proud to continue our TRUE zero-waste journey with Billie Eilish’s stop at State Farm Arena,” said Sofi Armenakian, Hawks and State Farm Arena Director of Sustainability and Operations. “Billie Eilish and her fans were instrumental in making this stop another successful green event. For this show, we are grateful for our partners at Levy, Pritchard and Novelis, as well as the assistance from University of Georgia’s Office of Sustainability, who helped us raise awareness in the venue on the importance and the positive impact sustainability has on future generations.”

As part of Saturday’s show, State Farm Arena teamed up with University of Georgia’s Office of Sustainability to help fans properly dispose items into the correct diversion streams: recycling, compost or landfill, to reduce contamination. The venue also provided vegan options throughout different locations on-site such as a vegan burger (at the same price as regular hamburgers), as well as salad options. All of this was in accordance with Billie Eilish’s mission to make her tour as eco-friendly as possible.

Across the entire tour, fans can enjoy the Billie Eilish Eco-Lounge hosted by Reverb, an environmental non-profit organization that will “green” the entire tour and create an activation on the concourse at each show allowing every guest that purchases a ticket to visit for free. The Billie Eilish Eco-Village showcases five non-profits including Support + Feed, along with local non-profits in each city that will be providing information on how to best help the climate in the healthiest ways.

The Hawks and State Farm Arena continue to lead the way in sustainable practices for sports and live event venues diverting more than 90 percent of fan-generated waste throughout its 2021 slate of Hawks’ basketball games, concerts and ancillary events. Throughout 2021, the Hawks and State Farm Arena diverted more than one million pounds of waste from landfills. At the end of last year, Novelis became the official aluminum recycling and proud sustainability partner on State Farm Arena’s journey to becoming a TRUE zero-waste venue. TRUE (Total Resource Use and Efficiency) is a standard set by Green Business Certification Inc. (GBCI), the world’s leading sustainability and health certification and credentialing body.

To learn more about how the Atlanta Hawks and State Farm Arena are leading the way in sustainability efforts across the sports and entertainment industry, visit StateFarmArena.com/sustainability.

For a list of upcoming events at State Farm Arena, visit StateFarmArena.com/events.