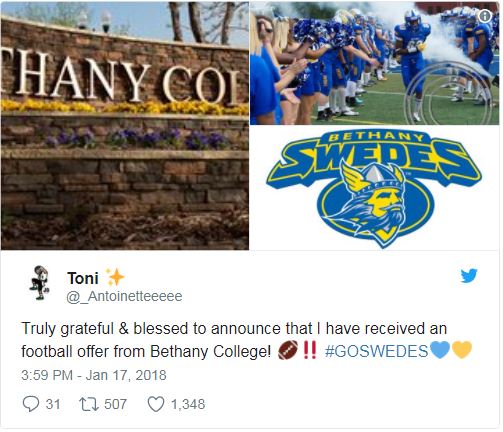 Antoinette “Toni” Harris wants to be the first woman to play in the NFL. On Wednesday, she moved a step closer to her goal when she received a scholarship offer from Bethany College, an NAIA school in Kansas.

Harris, who plays free safety for East Los Angeles College in California, will become one of the first female non-kickers on a college football roster — and may be the first to receive a scholarship offer. In 2014, cornerback Shelby Osborne signed with Campbellsville University in Kentucky, an NAIA school, but it’s unknown if she received a scholarship.

Last April, Becca Longo, a kicker from Arizona, became the first woman to sign a letter of intent to play college football at the Division II level or higher. Longo is a freshman at Division II Adams State in Colorado, where she is playing for both the football and women’s basketball teams.

Harris tweeted about the offer Wednesday night, and both she and Bethany College coach Paul Hubbard confirmed it to ESPN on Thursday.

NAIA schools can offer partial athletic scholarships, but athletes also can qualify for academic aid, which Harris does as an honors student at East Los Angeles College. Bethany assistant coach Tyrone Carter, who had previously coached at East Los Angeles, informed the coaching staff about Harris last week, and they decided to extend her an offer Wednesday.

“We were absolutely interested,” Hubbard said. “She definitely has the skill set. We’re always looking outside the box or inside the box to find players. We watched her compete against the kids out there.”

Several women have kicked for major college teams, including Katie Hnida at Colorado and New Mexico, and April Goss at Kent State, but none received scholarships to come to school.

“Plenty of females that have played,” Hubbard said. “But [Harris] would be the first at a skill position.”