Ben Ainslie Racing, a competitive sailing team formed by four-time Olympic gold medalist sailor Sir Ben Ainslie with the goal of bringing an America’s Cup title back to Great Britain, is also focused on sustainability its new headquarters in Portsmouth. The £15 million facility, built on a reclaimed brownfield coal store site on the Camber, will include a 114-kilowatt, 432-panel rooftop solar installation capable of generating 130 megawatt-hours of electricity annually. The installation will save over 60 tons of carbon dioxide each year. 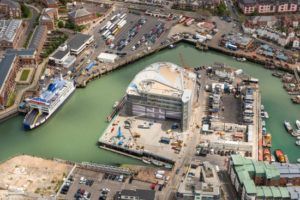 The racing team was already awarded ISO 20121 certification for sustainability across all of its operations in February, and released its first sustainability report earlier this month. The report articulated the goal of sourcing 100 percent of its electricity from renewable sources and the maintenance of BREEAM Excellent standards – British sustainable building standards similar to LEED certification – for water and energy consumption at its new headquarters.

“As societal role models, sports teams are in a privileged position. They have the power to drive positive change through setting an example and drawing attention to the issues that matter, such as sustainability,” Ainslie said. “As a team we are striving to become a truly sustainable business, however our ambitions extend far beyond this. We want to lead the way by educating and inspiring younger generations to drive sustainability forward.”