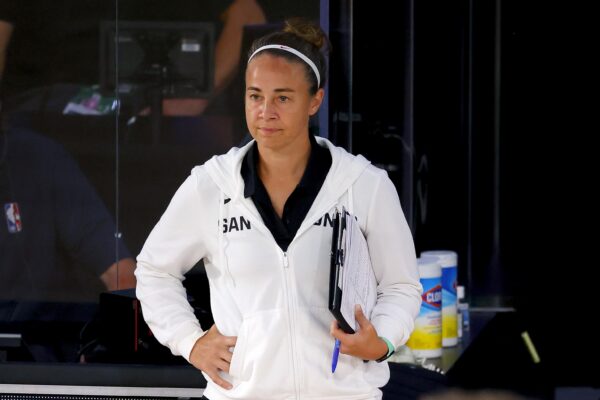 San Antonio Spurs head coach Gregg Popovich was tossed from the team’s game against the Los Angeles Lakers Wednesday night after getting charged with two technical fouls with less than four minutes remaining in the first half, and assistant coach Becky Hammon made history, becoming the first woman to serve as head coach in the NBA regular season.

She previously served as the acting head coach for the Spurs back in the NBA bubble, when she led the team through a 113-92 loss to the Milwaukee Bucks in one of their exhibition games.

The Spurs hired the Colorado State and WNBA alum in 2014 as she became the first woman to serve as a full-time assistant coach. She took over the franchise’s summer league program in 2015, leading the Spurs to a Las Vegas Summer League championship, and also worked as the summer league head coach in 2016 and 2019.

Hammon’s historic debut nearly came last season, when Popovich was thrown out against the Portland Trail Blazers, but he clarified postgame that Tim Duncan got the nod as acting head coach.

San Antonio apparently has a history of noteworthy ejections. In April 2019, Popovich was thrown out against the Denver Nuggets just 63 seconds into the game—the fastest ejection in NBA history.