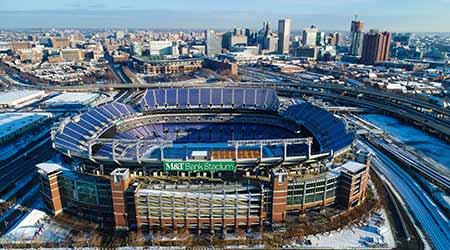 There’s plenty to cheer about in Maryland, as the National Football League’s Baltimore Ravens have had a banner 2019 season led by one of the most exciting athletes in all of sports. But fans of sustainability and sport in Baltimore have two other things to be proud about right now: the green sustainability efforts of the city’s two professional sports venues.

The Ravens’ home of M&T Bank Stadium, as well as Oriole Park at Camden Yards, the home of Major League Baseball’s Baltimore Orioles, are great examples of what green initiatives can accomplish, reports Coliseum.

Waste diversion is a priority for the Maryland Stadium Authority (MSA), which cares for both stadiums. Nine cigarette receptacles are placed on a warehouse grounds that most fans cross to get to either of the two stadiums on gameday. Once collected, the discarded cigarettes are not thrown out, but processed into plastic pellets which are then used to create recycled materials. The tobacco left inside the cigarettes is even repurposed via computing.

MSA even manages to get the Ravens and Orioles faithful involved in the sustainability efforts by educating tailgating fans on the importance of recycling — a major victory considering the amount of beers and sodas that are consumed prior to a game.

The efforts to go green at Oriole Park alone are impressive. The stadium’s water consumption has been reduced by more than a quarter in recent years though the use of low-flow water fixtures. Nearly 60 percent of the materials that went into the recent stadium upgrades were sustainable, and about three quarters of the waste was recycled.

M&T Bank Stadium is even better when it comes to water conservation. Its low-flow fixtures have reduced water usage by 43 percent. The stadium is also 27 percent more energy efficient than comparable buildings on average.