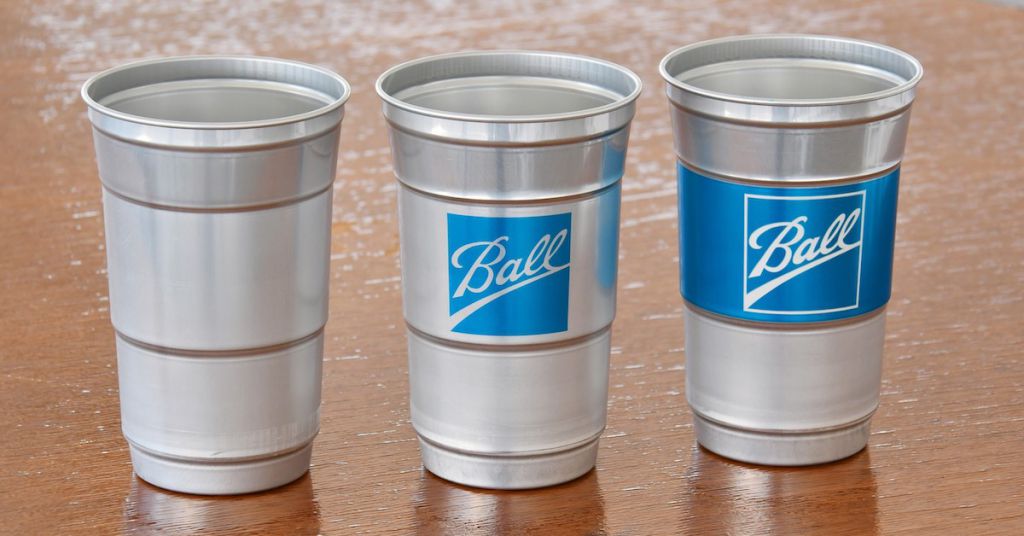 The average sporting event creates a lot of waste, and as more teams and venues work toward more sustainable operations, Ball Corp. is making moves to help.

Ball Corp., a manufacturer of aluminum cans, has released a new metal cup similar to the plastic cups commonly seen across the country. The cup aims to help create a more sustainable container for sports and entertainment venues, said Sebastian Siethoff, general manager at Ball Corp.

“The funny thing is, when we show consumers and stakeholders the cup, they take the meeting assuming it’s heavy metal,” Siethoff said. “But it’s super light – so light a regular consumer wouldn’t be able to discern it.”

The metal cup was born from an idea sparked via a conversation years ago with a bar owner, who talked about the liability issues of shattered glass. With the realization of the utility a thin metal cup could have, the Ball Corp. research and development team undertook a lengthy and detailed development process, Siethoff said.

“It’s just a cup at face value,” Siethoff. “But there’s a lot of technology that went into it.”

The Ball Corp. cup has now rolled out at the University of Colorado football games – essentially the home team for the Colorado-based manufacturer. The rollout at Folsom Field is a proof of concept and Siethoff expects the cups to make a wider appearance in the near future. Siethoff said the hope is for a large-scale rollout in 2021, including in restaurants, bars, and other retail locations, but has a list of “formidable pilot partners” coming soon.

Right now, the metal cups are in “classic stadium beer size” of 20-22 ounces, but Siethoff said the company is already thinking about a range of sizes.

Colorado launched the first Division I collegiate athletics sustainability program in 2008 and now aims to be plastic-free in its venues by next year. Colorado also was the first university to join the United Nations Sports for Climate Action Framework, along with the New York Yankees, NBA and Tokyo 2020 Summer Olympics.

“As an athletic department and university, we are proud of all we have done thus far and will continue to do in reducing our carbon footprint,” Colorado Athletic Director Rick George said. “We are thrilled to partner with Ball on this important project. Being conscious of the environment is not only the right thing to do, but it also sets an example for our fans and everyone else watching that they should make sustainable choices, too.”

According to the United Nations Environment Program, major sporting events can generate up to 750,000 plastic bottles each.

Stadiums make an easy first rollout strategy according to Siethoff, as the closed events within currently recycle approximately 70% of aluminum products, opposed to 40% of plastic. According to Ball Corp., 75% of aluminum ever produced is still in use – and can be recycled infinitely without losing quality. While the current recycle rate for metal is already higher, Siethoff said there’s still a learning curve. Siethoff also cited a Ball Corp. study that found 67% of consumers would visit a venue more often if they provided aluminum cups instead of plastic.

“We realize this is a new [category] and there are some operational considerations that need to be taken into account when you introduce this into a stadium,” Siethoff said.

When the Minnesota Twins and Target Field switched from plastic cups to compostable ones, along with clearly marked recycling and compost bins, the result was more than 5,400 tons of waste diverted from landfills. In the U.S., more than 60 million plastic bottles are thrown away each day.

Ball Corp., perhaps best known for its production of glass jars, lids, and related products used for home canning, is one of the world’s largest providers of metal packaging for beverages, foods and household products. It has been at the core of a major movement in the beer industry toward cans since the early 2000s.

The aluminum cup provides an alternative to plastic cups, but Siethoff said it’s not a complete replacement, rather an alternative that is 100% sustainable. He also said the performance of the cup is also better, as the tactile experience of a cold beverage held within it is better than a plastic cup.

“It’s a good thing for the planet, but we think of it as opening a new partition in the category and the benefits of making for a greatly improved experience,” Siethoff said. “Will it source from plastic? Absolutely. Are we concerned about plastic? Yes, but we really want to build up a new platform.”

Compared to plastic, Ball Corp.’s new product will be more expensive, but in line with other sustainable alternatives, Siethoff said. While the cost will be higher, Siethoff said the aluminum cups will more than makeup for it by helping bring in revenue with higher concession rates.

“We believe it will build consumption, soda and beer consumption,” he said. “If someone sits down with a shiny cup, enjoying a drink, you’ll want to get one. If it’s a better drinking experience, you’re consuming more.”

“We’re making a compelling case it will not even be break-even but a revenue generator.”