As Melbourne gets hotter and drier, the organisers of the year’s first Grand Slam are aiding the city’s climate change fight by hosting a sustainable tournament. 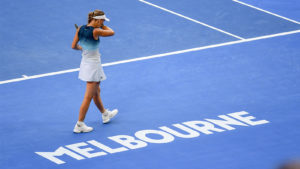 It looks like the first week (at least) of this year’s Australian Open will be another scorcher. Players harbouring hopes of easing themselves into the tournament, thus keeping themselves fresh for sterner tests in later rounds, will be greeted by temperatures of 35°C-plus. Many first and second round matches will become fights for survival.

January is traditionally a hot month in Melbourne and players will, more or less, be prepared for the conditions. But organisers will be hoping to avoid repeats of 2014 and 2018. During the latter, France’s Alize Cornet required medical assistance after falling ill, while five years ago the heat was so strong that Canadian player Frank Dancevic started to hallucinate during a match.

Last year was, in fact, Australia’s third warmest on record. Worryingly for the nation – and tournament organisers – is that nine of the 10 warmest years on record have occurred since 2005, according to the Australian Bureau of Meteorology. Australia is getting hotter. And the significant weather events that happened over the last 12 months could be a sign of things to come.

Victoria, the home state of Melbourne (where the first Grand Slam of the year is played annually), declared a state of emergency due to raging bushfires for the second year in a row.

These events, catalysed by global warming, prompted the City of Melbourne to launch its own Climate Change Mitigation Strategy 2050 last month, which aligns with the goal of the Paris Agreement to keep the global rise in temperature below 1.5°C. In 2018, Australia’s average maximum temperature was 1.55°C above the 1961-1990 average.