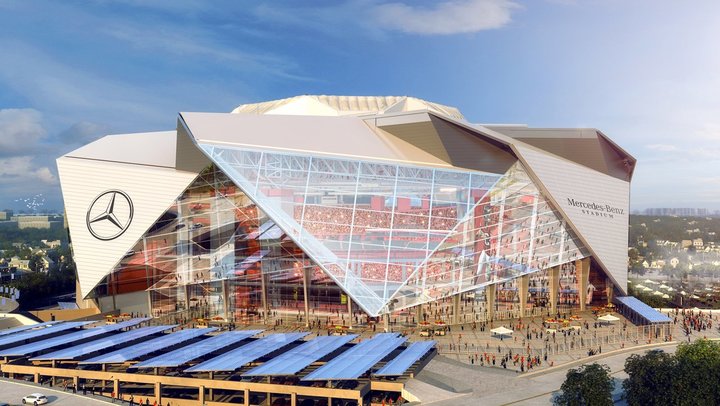 Mercedes-Benz Stadium is a behemoth, located delicately in the center of downtown Atlanta between skyscrapers, public parks, and thousands of homes. Huge, triangular glass panes make up the outer walls of the $1.5 billion structure and reflect a diverse city that is hosting three professional stadium projects completing in the span of a year (the Braves open their new ballpark in April and the Hawks are planning a massive renovation ready for next season).

In 2017, sports stadiums have become the source of increasing public criticism. Debate has raged on the ethics of billionaire owners threatening their hometown with relocating in exchange for hundreds of millions in stadium funding. Studies, such as the one done by Stanford’s Roger Noll, have created doubt as to how much value a stadium truly adds to a community. So how does a modern mega sports complex answer these questions? Can a billion dollar stadium give back as much as it takes? It’s a question that needs to be answered, and perhaps Atlanta’s Arthur Blank is the one to do it.

The decision to build a new NFL stadium in Atlanta was not without controversy. The former Georiga Dome was built in 1992 and was only 18 years old when plans were announced for its replacement. Negotiations between Blank and Atlanta mayor Kasim Reed were productive and no shakedown occurred, but that didn’t prevent critics from balking at the $200 million of public money that was spent on what might not be the most necessary of stadium projects. What the critics didn’t know at the time was just what Blank had up his sleeve; a vision to transform what a stadium could do to a surrounding community, and an ambitious quest to build the most environmentally friendly NFL stadium ever.

To truly understand what this stadium is, you have to understand its surroundings. Mercedes-Benz Stadium sits on the edge of Atlanta’s Westside, a fraught neighborhood that has seen the raw end of real estate deals in the past. When heavy storms roll through the city, rain water tends to overwhelm the sewer system and funnel into the neighborhoods in the Westside. The result is heavy flood damage that never gets repaired. It’s been an issue largely ignored for decades, but Blank and his team developed a plan to use the stadium to alleviate the problem. In the early stages of construction, a 1.1 million gallon storm vault was implemented to catch rainwater. That harvested water will be used for irrigation and the stadium’s cooling system. It’s not a cure-all, but it’s an example of a new kind of awareness in stadium engineering that Mercedes-Benz Stadium hopes to pioneer.