Atlanta Falcons to Include Edible Gardens in Design of New Stadium

Atlanta Falcons to Include Edible Gardens in Design of New Stadium

Following in the footsteps of other Green Sports Alliance members such as the Tampa Bay Lighting and Boston Red Sox, the Atlanta Falcons are incorporating urban agriculture into the landscape of their new stadium as part of the franchise’s strategy to build its new stadium to the standards of the highest level of LEED certification. In collaboration with local planning and design firm HGOR, the Falcons plan on incorporating raised garden beds and edible plants and trees into the landscaping of the stadium grounds. 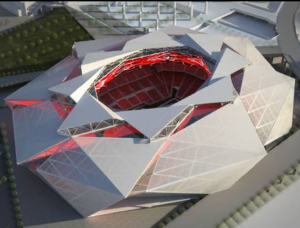 The team plans to include figs, apples, and other crops into the design, which will utilize storm water collection to irrigate the gardens. The stadium will also grow blueberries, highlighting Georgia’s position as the nation’s top blueberry-growing state. Further crop decisions are still in the planning stages.

The Falcons are also investigating ways to integrate their urban agriculture project into the Westside community where the stadium is being constructed. The team has received support for this initiative from both the Arthur M. Blank Foundation and the Captain Planet Foundation. According to Scott Jenkins, the general manager of the new stadium, finding a way to involve the Westside neighborhood “would be our target, whether it’s working with a local school on gardening and healthy food or providing food to a local food program.”