As Alaska Warms, The Iditarod Adapts

As Alaska Warms, The Iditarod Adapts

ANCHORAGE — The Iditarod dog-sled race has gripped the imagination here for a long time, partly because it captures the idea, cherished by Alaskans, that a true-north wildness lies just over the horizon, and anyone getting there must first face a harsh gantlet of ice and cold. 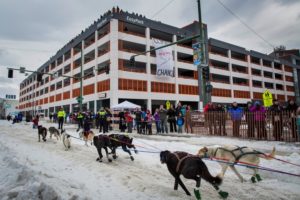 A banner noting “Climate Changed” hung along the parade route during the ceremonial start of the Iditarod on Saturday in Anchorage. Credit Katie Orlinsky for The New York Times

Snow delivered by train never figured into that image.

But there it was, four or so inches of dirty snow with the consistency of sand, dumped overnight by trucks onto a downtown street for the 85 teams of sled dogs and drivers, called mushers, to parade through for the race’s ceremonial start Saturday morning. The parade was only three miles long instead of the usual 11 because, despite the train delivery of tons of snow from Fairbanks, there still was not enough to go around.

“We’ve moved snow before,” said Tim Sullivan, a spokesman for the Alaska Railroad, which brought down seven train carloads of snow for the festivities.

But hauling snow to someplace that wants it? “That’s unusual,” he said.

Winter here is changing rapidly. Of the six warmest November-to-January seasons in Alaska since 1925, three have been in a row, including this one. Anchorage this year had its fourth-warmest February on record — at 29.9 degrees, almost 10 degrees above average — with little snow for weeks.