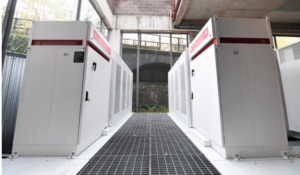 When Arsenal hosts English Premier League blood rival Tottenham Hotspur at The Emirates StadiumSunday at 9:05 AM EST in the latest version of the “North London Derby,” the outcome may be determined by which of the two quality sides has the most energy.

Regardless of the result on the pitch, Arsenal has a decided advantage in energy storage.

The team recently unveiled a Tesla-manufactured battery storage unit at its 60,000-seat Emirates Stadium in north London that can store enough energy to run the stadium for 90 minutes, the length of a match.

Per a November 26 story by Patrick Hodges in Bloomberg, “the two-megawatt lithium-ion battery installed by Pivot Power LLP — which will operate it for 15 years — will allow the soccer club to buy electricity when it’s cheaper and use it at peak times. Arsenal said it plans to add a further one megawatt of storage next summer.”

The battery can also generate income for the club through a deal with utility company National Grid in which the battery can be used to stabilize the grid. Basically, the Arsenal battery can sell electrons to the utility on non-game days when demand is high.

“This is a big step forward for us in being efficient with energy usage, and building on our work in reducing our carbon footprint as an organization,” said Vinai Venkatesham, Arsenal’s managing director, in a statement on http://www.arsenal.com.