The Arizona Cardinals have hired the first female coach in National Football League history, the team and the NFL said Monday.

Jen Welter, a former rugby player at Boston College, played 14 seasons in women’s pro football and was the first woman to play a non-kicking position in a men’s pro league — as a running back for the Texas Revolution of Indoor Football League. 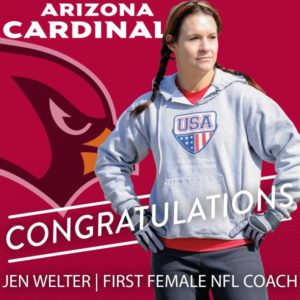 “I want little girls everywhere to grow up knowing they can do anything, even play football,” Welter said last year on NBC’s TODAY.

With the Cardinals, Welter will work with inside linebackers as a training camp-preseason intern coach. She’s also a veteran at coaching men, moving to the Cardinals from the Revolution, for whom she was linebackers and special teams coach.

The NFL confirmed Monday night that she is the first female coach in league history.

Welter, 37, won gold medals with Team USA in the International Federation of American Football Women’s World Championships in 2010 and 2013, and she has a master’s degree in sports psychology and a Ph.D. in psychology.

The move is something Cardinals coach Bruce Arians has talked about before, saying in an interview in March that the league would hire female coaches if they “can prove they can make a player better.”

“Coaching is nothing more than teaching,” Arians said Monday. “The one thing I’ve learned from players: All they want to know is: ‘How [are] you going to make me better? If you can make me better, I don’t [care] if you’re the Green Hornet. I’ll listen.'”

Nor will Welter be the only woman on an NFL field this year. In April, the league hired Sarah Thomas, a respected men’s college football official, as its first full-time female game official.

Read the article from NBC news.