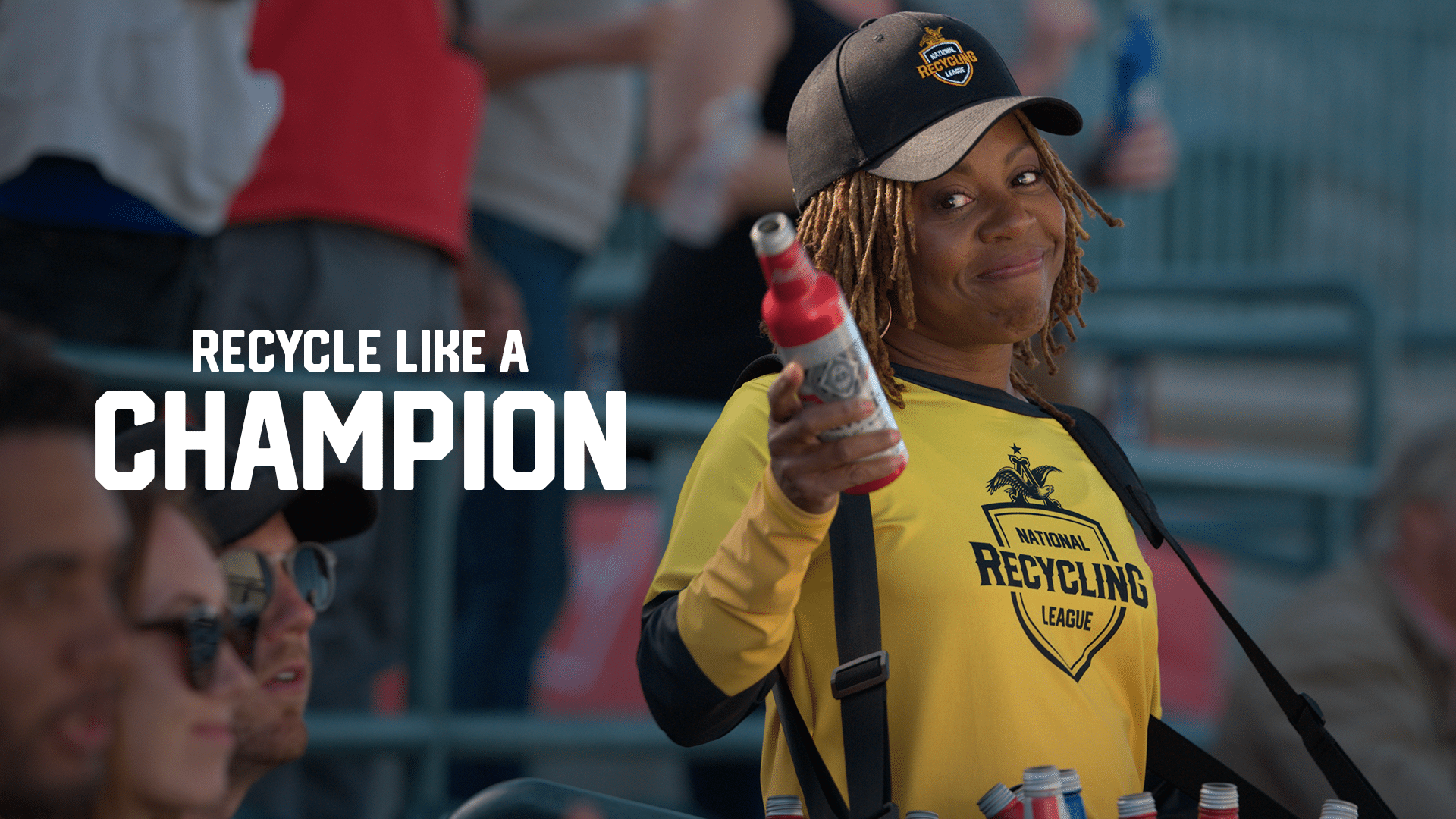 ST. LOUIS, MO – April 12, 2022 – As one of the country’s largest sponsors of live sports and entertainment, Anheuser-Busch is uniting its sports team partners – including Major League Baseball and the National Football League – to launch the National Recycling League: a new, multi-sports league coalition aiming to reduce waste on game day.

Building on Anheuser-Busch’s industry-leading sustainability efforts, the National Recycling League will leverage the scale and reach of the brewer’s professional sports team and league partnerships to elevate how the beverage industry encourages recycling. The National Recycling League aims to create meaningful connections between Anheuser-Busch’s brands including Budweiser, Bud Light and Michelob ULTRA, its league and team partners, and sports fans nationwide to raise awareness of the need for recycling and drive key recycling behaviors among consumers wherever they cheer on their favorite team – whether it’s in-stadium, at home, or at a neighborhood bar.

“At Anheuser-Busch, we approach everything we do – including sustainability – with an innovation mindset so that we can create an outsized impact,” said Brendan Whitworth, CEO of Anheuser-Busch. “Through the National Recycling League, we are thrilled to bring together our team partners and sports fans to work towards a shared dream of a future with less game day waste and more cheers.”

Each team has committed to adopting and implementing a range of new, innovative National Recycling League activations aimed at reducing waste and improving recycling rates at stadiums to help divert recyclable materials such as beer bottles and cans from landfills. Activations include offering infinitely recyclable aluminum cups to fans instead of single-use plastic as aluminum can be recycled over and over again without losing its quality, in-seat recycling decals, and in-stadium signage sharing a simple call-to-action with consumers – ‘Recycle Like a Champion.’

“Major League Baseball and our Clubs are excited to collaborate with Anheuser-Busch on the launch of their National Recycling League initiative. This commitment to environmental stewardship by our long-term partner perfectly aligns with our continued efforts to bring more recycling options and sustainable practices to our ballparks,” said Paul Hanlon, Senior Director of Ballpark Operations and Sustainability, Major League Baseball.

To launch the National Recycling League, Anheuser-Busch and select MLB partners will be introducing a new member of the sports arena team. Similar to the beloved beer hawker, new Recycling Hawkers will be deployed in stadiums to collect used cups, cans and bottles from fans to ensure they are recycled properly. Recycling Hawker volunteers from Keep America Beautiful® will encourage fans to hand over their recyclables so that those items can be sorted from the trash and recycled. Check out the Recycling Hawkers in action here.

“As a longstanding partner of Anheuser-Busch, we applaud the action to improve communities by reducing waste in sporting arenas across the country,” said Becky Lyons, Interim Chief Executive Officer at Keep America Beautiful. “Our team of volunteers are energized and excited to step into the new Recycling Hawker role and help make it easy for fans at sporting events to recycle properly.”

In addition to in-stadium activations throughout regular season games, select partner teams will compete head-to-head in a new way as the brewer calls on MLB fans to join the National Recycling League and recycle their bottles and cans, with the winning city getting a round of beer on Anheuser-Busch. The city of the participating team which has the highest recycling rate during home games from Opening Day through May 31 will get a round of beer on Anheuser-Busch in celebration of their commitment to reducing waste on game day. More information is available at www.mycooler.com/recyclelikeachampion

Looking ahead, Anheuser-Busch plans to work alongside teams across the National Football League among other league partners to enlist them to participate in the National Recycling League as the 2022 NFL season kicks off.

The National Recycling League builds on Anheuser-Busch’s ongoing commitment to sustainable packaging and recycling – including through its 2025 Sustainability Goals and as a member of the Green Sports Alliance. By 2025, Anheuser-Busch has committed that 100% of their packaging will be made from majority recycled content or will be returnable, which will make recycling A-B products on game day easier than ever.

For more than 160 years, Anheuser-Busch has carried on a legacy of brewing great-tasting, high-quality beers that have satisfied beer drinkers for generations. Today, we own and operate more than 120 facilities, including breweries, wholesaler distribution centers, agricultural facilities and packaging plants, and have more than 19,000 colleagues across the United States. We are home to several of America’s most recognizable beer brands, including Budweiser, Bud Light, Michelob ULTRA and Stella Artois, as well as a number of regional brands that provide beer drinkers with a choice of the best-tasting craft beers in the industry. From responsible drinking programs and emergency drinking water donations to industry-leading sustainability efforts, we are guided by our unwavering commitment to supporting the communities we call home. For more information, visit www.anheuser-busch.com or follow Anheuser-Busch on LinkedIn, Twitter, Facebook and Instagram.