This is a re-post of Matt Chester’s interview with Lew Blaustein of The Green Sports Blog.

The Green Sports Blog is one of the premiere websites covering the intersection of sports with the worlds of energy, the environment, and climate change. Publishing at least once or twice a week, this blog spreads awareness of the eco-athletes in the big leagues, provides commentary and analysis of the latest green initiatives in sports, and is a one-stop shop for this growing field of study. I had the opportunity to speak with Lew Blaustein, the writer behind the Green Sports Blog, and ask him some pressing questions I had as both an energy nut and a sports fanatic. And if after reading my interview with Mr. Blaustein you feel compelled to learn more, I highly recommend you head to the Green Sports Blog and sign up to receive email alerts when new articles are published and follow him on Twitter as well. 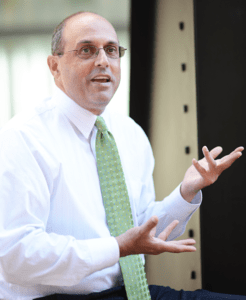 My conversation with Lew Blaustein:

Chester Energy and Policy: First off, Lew, I just wanted to thank you for taking the time to speak with me about the work you’re doing at the intersection of energy and sports, a topic that I think doesn’t get enough attention. I have a couple of questions I’d love to ask to get some more insight into your work and the difference you’re hoping to make in the sports industry as it relates to energy.

Lew Blaustein: Sure, fire away!

Chester: To start with the basics, why sports? What drew you to investigate and highlight the intersection of sports with green issues?

Blaustein: Well I would say that the question should really be the other way around. I always wanted to work in sports ever since I was about seven years old, but I knew I was a crummy athlete, so I first tried sportscasting, which was a very tough way to make a living. Then I tried sports business– ad sales, business development, promotions, marketing, communications, and I did that for over 15 years.

Through all of this I always considered myself a ‘lowercase e’ environmentalist, but my passion for it did not rise to the level of my sports passion until 9/11 occurred. I was always living and working in the New York/New Jersey/Connecticut tri-state area, and when 9/11 happened I was working for Sports Illustrated for Kids. In the wake of the attacks, though, I felt I had to do something, but what was that something? I really didn’t know, but then about three or four months after that Thomas L. Friedman, an author and columnist with the New York Times, wrote a column that said green is the new red, white, and blue. The idea was that the United States at that time comprised about 4% of the world’s population and 25% of the world’s energy use, as this was before the fracking boom, domestic production boom, and the rise of India and China to any large degree (now we’re closer to 4% of population and about 20% of energy use). So, Friedman made the point that our insanely profligate energy use was fueling the terrorism that we were fighting. That really resonated with me. I thought it was this bipartisan type issue that everyone would want to reduce our country’s energy demand.

I was inspired– I went out and bought a hybrid car (eventually I just got rid of my car, since you can do that in New York City), I changed all my light bulbs, I almost became vegetarian, all these sorts of things. As time went on, I got schooled on climate change, and so then it made even more sense. So, I went off in 2005 and left Sports Illustrated for Kids and became a communications/business development/marketing consultant with a sustainability focus.

Then a few years later, around 2008 or 2009, I started thinking what if there was an intersection of green and sports and how cool that would be, given my duel passions. In short order, I found out about the Green Sports Alliance (GSA) and poked around some more and in 2013 I decided to start this blog because no one else was doing anything like it. I thought this would help me get to know all the people in that world (small as it was and still is) and that would help me build my consulting business, which has happened to a degree. Then it turns out that people like the blog and so that’s how that all came to be.