An Inside Look at the Pac-12’s Sustainability Efforts, with an Assist from Bill Walton and Seattle

An Inside Look at the Pac-12’s Sustainability Efforts, with an Assist from Bill Walton and Seattle 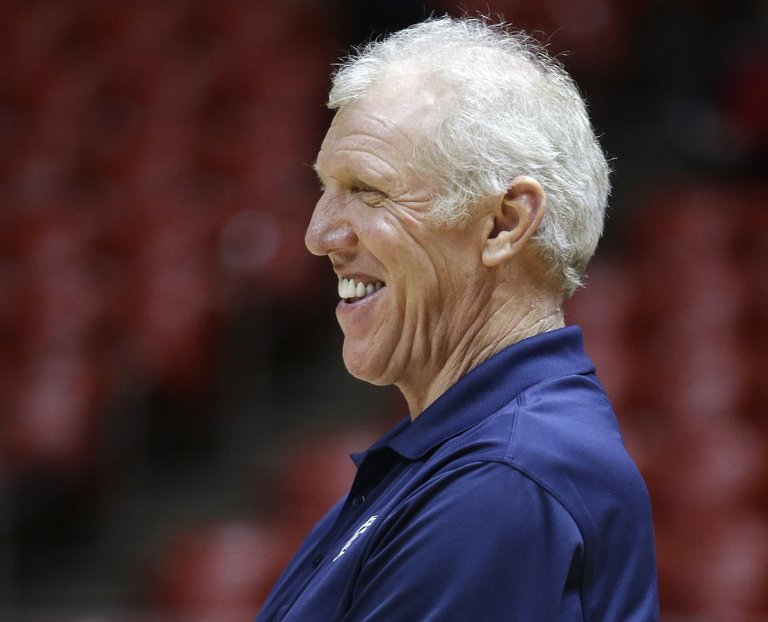 Bill Walton will be the keynote speaker for the Pac-12’s sustainability conference Tuesday in Seattle. (Rick Bowmer / The Associated Press)

At the Pac-12’s inaugural conference on environmental sustainability, in 2017, keynote speaker Bill Walton did something that would have been surprising for anyone but Bill Walton. He announced his personal cell number in front of hundreds of attendees and asked them to send him examples of green efforts in their lives.

Walton is a keynote speaker for the third annual sustainability conference, which begins Tuesday in Seattle. He had not yet finalized his podium plan at the time of our recent conversation, but the remarks will undoubtedly be heartfelt.

The environment is on Walton’s Rushmore of Passions, alongside basketball, cycling and the Grateful Dead, and he has become the willing, public face of the conference’s expanding green efforts. Those efforts include the 2018 formation of Pac-12 Team Green, described by the conference as the first sustainability platform in college athletics. Led by deputy commissioner Jamie Zaninovich, Team Green is designed to support environmental work on Pac-12 campuses with seminars, waste-diversion competitions, best-practices discussions and corporate sponsors.

“There couldn’t be a better place to host,” Walton said of the two-day conference on the University of Washington campus, “particularly because of what (Washington Governor) Jay Inslee is doing to try to change the course of history in face of challenges with population, with habitat destruction and with the choices we make.”

During an hour long interview about his work with the Pac-12 on sustainability, Walton was raw and unfiltered. At one point, I went 25 minutes without uttering a peep. He talked about the moment his spine failed, in February 2008: “When you’re lying on the ground and you’d rather be dead, things change, your perspective changes.” He quoted the Dead, Dylan and Neil Young. He cited books on travel and the environment, with “The Geography of Genius” by Eric Weiner and “The Good Rain” by Timothy Egan among his favorites. He talked about lobbying efforts by fossil-fuel companies and humanity’s dependence on single-use plastic bottles. He provided an hour-by-hour account of a “glorious” fishing trip with Gonzaga coach Mark Few. He asked if I had taped my mouth to an exhaust pipe. His tone alternated between joyous and grim, between relentless and rhetorical, but the passion never dipped below a 12. Our trip through Waltonville eventually ended where it began: His partnership with the conference on its sustainability efforts.

“I love being alive, and I plan to stay alive, and I want it for our four kids and our nine grandkids,’’ he said. “So when the Pac-12 calls with an incredible opportunity like this — I’m always searching for possibility of being involved in making progressive change in the world. This is my life and my chance to be involved with something so critically important as sustainability. I couldn’t pass it up when I see what the Pac-12 is doing as conference. It was David Brower who coined the phrase: ‘If environmentalism fails, no other good cause can succeed.’”

Green efforts were well underway across the conference before Team Green provided the platform and Walton the support. Colorado officially joined the cause in 2008, becoming the first athletic department in the country to feature a sports-sustainability program (Ralphie’s Green Stampede). The Buffaloes are also members of the United Nations Sports for Climate Action initiative, which includes the NBA, FIFA, the New York Yankees and the Golden State Warriors.

Their indoor practice facility, which opened in 2016, is a net-zero-energy building. Athletic director Rick George was a featured speaker, along with Walton, at the Pac-12’s first sustainability conference; CU was the host of the second. “It’s so much a part of who we are,” George said. “All our peers (in the Pac-12) are fully engaged, and the conference is promoting what we’re all doing and has been a fantastic partner.”

With Zaninovich running point, the Pac-12 announced the formation of Team Green in July 2018. In addition to amplifying the efforts on campus, the Team Green platform provides a mechanism for sponsorship and, potentially, commercial opportunities. It has three pillars:

• The working group: Composed of representatives from each campus, the Team Green leadership arm meets annually in person and holds quarterly conference calls.

• The Zero Waste Challenge. An intraconference event in which schools compete to determine which campus can divert the greatest tonnage of landfill at one home football game and one home basketball game.

Team Green also has a partner: Unifi, the global textile company that developed a means of turning recycled plastic into performance fiber (called Repreve), with the goal of creating a circular economy. (The fiber, for example, was used to make the caps and gowns for Washington’s graduation ceremony: 23 recycled bottles were required for each gown.)

“Any time we can engage in meaningful social-impact work, which reflects the collective DNA of our member institutions and shows promise for long-term commercial potential,” Zaninovich explained, “we want to be early to those opportunities.”

The conference in Seattle starts with a day of service, in which Team Green members from across the conference will hand out socks made from the Unifi fiber to the homeless. There are a slew of speakers lined up and more than 180 attendees expected from the schools and Pac-12 partners such as the Green Sports Alliance, Learfield IMG College and Alaska Airlines. Panel discussions will focus on generating fan engagement in Zero Waste efforts, ideas for long-term Green campaigns and ways to better involve student bodies in general.

“Every school (in the Pac-12) has a sustainability department working on all the issues,’’ Walton said. “This allows them to share best practices and raise awareness. But spreading the message is only part of it. We have to provide alternatives for the health of the Earth and energy production and rescue management and resource consumption. We have a tremendous platform. Now we have to exhibit the emotional commitment. The clock is ticking.”