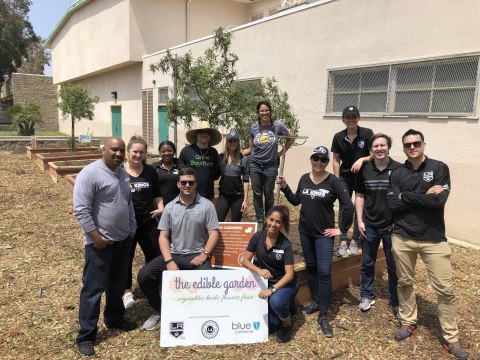 LA Kings team up with Enrich LA to build and refurbish organic gardens throughout schools and community organizations in Los Angeles as part of LA Kings Green, the team’s sustainability program which aims to bring awareness to the most critical environmental issues and drive positive impact through arena operations as well as fan and community engagement. (Photo: Business Wire)

“AEG has built significant global trust and moral leadership, and — because sports touch on every cross-section of society — drives positive change throughout the world,” said UN Head of Global Climate Action, Niclas Svenningsen. “I applaud AEG’s use of its significant global leadership position to help us address the greatest challenge of our time: climate change.”

“AEG is proud to support the UN Sports for Climate Action Framework,” said John Marler, Vice President of Energy and Environment, AEG. “Given our (AEG’s) recently adopted greenhouse gas emissions reduction goal – which aligns with the UN’s Intergovernmental Panel on Climate Change’s (IPCC) report on limiting global warming to no more than 1.5 degrees Celsius – this is a natural next step for our sports teams that will complement our existing efforts to reduce our carbon emissions and to raise awareness about this critical global challenge.”

In December of 2018, representatives from the global sports sector and the UN Climate Change Secretariat launched the Framework at the UN Climate Change Conference (COP24) in Katowice, Poland. The Framework’s two overarching objectives are to promote a set of principles for the global sports community to adopt in order to combat climate change and to use sports as a unifying tool to drive climate awareness and the action among global citizens. Organizations signing on to the Framework commit to the five Principles, which are to:

Through AEG’s industry-leading corporate sustainability program, AEG 1EARTH, the company will continue to leverage its existing sustainability efforts which include LA Kings Green and the LA Galaxy’s Protect the Pitch initiatives, which aim to bring awareness to the most critical environmental issues and drive positive impact through arena operations as well as fan and community engagement.

About AEG
Headquartered in Los Angeles, California, AEG is the world’s leading sports and live entertainment company. With offices on five continents, AEG operates in the following business segments: AEG Facilities, which is affiliated with or owns, manages or consults with more than 150 preeminent arenas, stadiums, theaters, clubs and convention centers around the world including The O2 Arena, the Sprint Center and the Mercedes-Benz Arenas; AEG Presents, which is dedicated to all aspects of live contemporary music performances, including producing and promoting global and regional concert tours, music and special events and world-renowned festivals; AEG Real Estate, which develops world-class venues, as well as major sports and entertainment districts like STAPLES Center and L.A. LIVE; AEG Sports, which is the world’s largest operator of sports franchises and high-profile sporting events; and AEG Global Partnerships, which oversees worldwide sales and servicing of sponsorships including naming rights, premium seating and other strategic partnerships. Through its worldwide network of venues, portfolio of powerful sports and music brands, AXS.com ticketing platform, AXS cable television channel and its integrated entertainment districts, AEG entertains more than 100 million guests annually. More information about AEG can be found at www.aegworldwide.com.