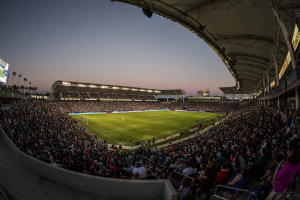 AEG, the world’s leading sports and live entertainment company, hosts 100 million fans annually at more than 120 stadiums, arenas and other facilities around the world. In an effort to lower its energy use and minimize its environmental impact, the company has installed an innovative, advanced Tesla Powerpack battery/energy storage system at StubHub Center in Carson, CA, home of Major League Soccer’s LA Galaxy. GreenSportsBlog spoke with John Marler, AEG’s Senior Director, Energy and Environment Systems, about StubHub Center being the first stadium to have on-site energy storage.

According to John Marler, that is the exorbitantly high price for electricity AEG pays Southern California Edison for electricity at StubHub Center, from noon to 6 PM on high demand, hot summer weekdays. The price goes down to as low as 10 cents per kilowatt hour overnight.

This price disparity exists for large commercial customers because in Southern California, as elsewhere, there is more demand on the electrical grid during peak times than off-peak times. During peak times, the grid also tends to use more carbon-intensive forms of electric power generation, such as from “peaker plants,” which are activated on very hot days to meet demand.
… 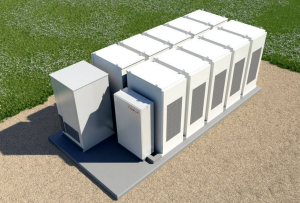 In January 2016 StubHub Center installed 20 Tesla Powerpack commercial batteries for the purpose of shifting usage from peak to non-peak periods and to reduce event-related demand spikes, becoming the first stadium to have energy storage on site.

The technology embedded in the batteries used in Tesla electric vehicle (EV) drive trains is similar to the technology in battery systems that power homes, businesses and now stadiums. So, to my eyes, Tesla is much more than an iconic EV maker—which is off-the-charts cool as it is— it is rapidly evolving into a Battery Systems Manufacturer/Energy Storage company.